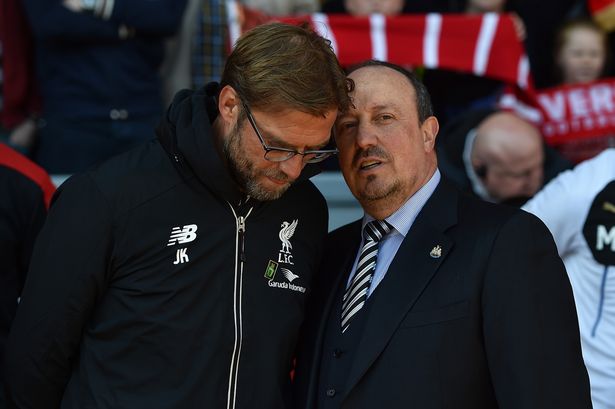 Liverpool is one of the biggest football clubs in the world. It has a rich history and a huge fan-base worldwide. In this article are going to have a look at the most successful Liverpool managers based on win percentage.

Here are the 10 most successful Liverpool managers –

Phil Taylor was appointed manager of Liverpool in 1956 when former manager Don Welsh was sacked after failing to gain promotion back to the 1st Division.But failing health and the stress of just missing out on promotion in three successive seasons eventually led to his resignation in November 1959. It was over 23 years since he had first arrived at Anfield as an 18-year-old player.

Roy Evans managed Liverpool from January 1994 to November 1998 ,during that time Evans had been credited with creating arguably the nation’s most exciting and aesthetically pleasing team of the 1990s. He managed 226 games and won 127 of them ,winning League Cup in the way.

Jürgen Klopp is the current manager of Liverpool having taken over the reigns from Brendan Rodgers in 2015. In his first year in-charge of the club, he guided Liverpool to the finals of Europa League and League Cup but failed to win any of them.

After steering Liverpool to a top 4 finish last season,Klopp has successfully brought Champions League football back at Anfield ,which was one of the priorities when he joined Liverpool. So far he has managed 104 games and won 54 of them.

Bill Shankly is one of the most respected managers in Liverpool’s history. Shankly took charge of Liverpool in 1959 when they were in the Second Division and rebuilt the team into a major force in English and European football. He led Liverpool to the Second Division Championship to gain promotion to the top-flight First Division in 1962, before going on to win three First Division Championships, two FA Cups, four Charity Shields and one UEFA Cup.

Shankly announced his surprise retirement from football a few weeks after Liverpool won the 1974 FA Cup Final, having managed the club for 15 years ,and during that time he won 407 games of the 783 games he managed.

Bill Shankly seemed indestructible but he suffered a heart-attack in the Autumn of 1981 and died shortly afterwards on the 29th of September. His legacy can still be seen at Anfield today but not just in the gates that bear his name or the statute at the back of the Kop. Shankly was the catalyst that Liverpool needed.

Gérard Houllier arrived at Anfield to work alongside Roy Evans as joint manager in the summer of 1998. It was a partnership that only lasted four months as Evans left the club in November that year leaving Houllier in sole charge.Houllier’s first season ended with them narrowly missing out on a place in the Champions League having been edged out by Leeds on the final day.

The 2000/2001 season proved to be the signal of Liverpool’s re-emergence under the Frenchman as he led his team to triple glory in the Worthington Cup, the FA Cup and the UEFA Cup. Not only that, but the Champions League place that had eluded The Reds for so long was also claimed, ironically at Leeds’ expense, again on the final day of the season.

The 2003/04 season proved to be Houllier’s last with the club. Despite securing qualification for the Champions League with a fourth-placed finish, The Reds and Houllier ‘parted company’ with Liverpool on 24th May after a meeting with the board. He won 160 games out of 307.

Joe Fagan joined Liverpool on 30th of June 1958 as a coach. He was put in charge of the Liverpool reserves in July 1971 and following Shankly’s surprise departure as manager he was promoted to 1st team trainer in July 1974. By 1979 he had become right-hand man to Paisley. On 1st of July 1983, Fagan took over as manager from Paisley. Bob was a tough act to follow but everything fell into place for the him in his first season. Joe wrote his name in the record books by becoming the first British manager to win three major titles in one season; the League, the Milk cup and the European cup.

He had decided to retire at the end of his second season and his final match in charge was the 1985 European Cup Final which was the scene of the Heysel Stadium disaster, an event that caused him great distress. He was only manager for two seasons but he achieved a lot and it could have been even more. He won 71 of the 131 games he managed.

Rafael Benítez is the last manager to lead Liverpool to Champions League/European Cup , a trophy they have won 5 times,which is more than anyone in England. Benitez came to Liverpool from the Valencia in June 2004 to replace Gerard Houllier. Benítez had barely arrived at Liverpool when Michael Owen was sold to Real Madrid. However, he quickly reinforced the squad by signing several players from La Liga, most notably Luis García and Xabi Alonso.

His first League season at Liverpool was a huge disappointment. Eleven of the nineteen away matches were lost and the team eventually finished in 5th place immediately behind their city neighbours Everton. It was the cup competitions that would build momentum as Rafa’s debut season. Although humbled by Burnley in the third round of the F.A. cup, Liverpool reached the final of the other domestic cup competition before losing to Chelsea after extra-time.

However in the UEFA Champions League it was very different, despite a poor start. Liverpool began their campaign with an unimpressive 2-1 aggregate win over Grazer AK in the qualifying rounds and were minutes away from going out in the group stages before an 87th minute goal by Gerrard defeated Olympiakos 3-1 and saw the club progress to the last sixteen. Bayer Leverkusen were beaten 3-1 home and away followed by Juventus who were beaten 2-1 on aggregate.

In the semi-final Liverpool faced Chelsea F.C., runaway leaders in the Premiership and favourites to win after overcoming the highly rated FC Barcelona in a previous round. Chelsea F.C. had already beaten Liverpool in the League Cup final and twice in the Premiership. However a controversial goal by Luis García saw Liverpool win 1-0 on aggregate and reach the final against AC Milan. In a classic UEFA Champions League final, Liverpool came from 3-0 down at half-time to level the score at 3-3 and eventually win on penalties.

Rafa Bentitez stayed with Liverpool for six season before leaving the club in 2010 by mutual consent. He won 194 of the 350 games he managed.

Dalglish took over as player-manager from boss Joe Fagan, who resigned after the tragic Heysel Stadium incident, and took Liverpool to their first ever double. They beat their Merseyside neighbours Everton to the League title as well as defeating them in the FA Cup. Dalglish had scored the winner against Chelsea at Stamford Bridge that confirmed to seal the title for the Reds.

Dalglish resigned from the Liverpool hotseat in early 1991 citing health reasons. In his five and a half-year in-charge of the club, Dalglish won the league 3 times as well as 2 Fa Cup and 4 Community Shield.

Dalglish was re-appointed Liverpool’s manager in January 2011 and in February 2012, Dalglish led Liverpool to their first trophy in six years, with victory in the 2011–12 Football League Cup. In the same season he also led Liverpool to the 2012 FA Cup Final where they lost 2–1 to Chelsea. Despite the success in domestic cups, Liverpool finished eighth in the league, their worst showing in the league since 1994, failing to qualify for Europe’s Champions League for a third straight season.

Following the end of the season, Liverpool dismissed Dalglish on 16 May 2012. Over the course of two spells, Dalglish managed 381 matches and won 222 of them.

Barclay was previously manager of Everton before joining Liverpool. His time at Everton was short managing them for their first 22 games. When the majority of the Everton set-up left Anfield in order to move to the purpose-built Goodison Park Barclay was one of the people who stayed to form a new club which eventually became Liverpool F.C. John McKenna too remained with Houlding, Liverpool’s founder, after Everton left Anfield for Goodison Park. Thus William Edward Barclay & John McKenna became joint managers of newly formed Liverpool FC in 1892.

They managed 127 competitive games (including games in the Lancashire League) and won 77 of them.

Liverpool offered Bob Paisley the job of reserve team manager in 1954 and eventually his skill with the new electrical equipment made him the in-house physio. In 1971 when Shankly signed what was to be his last contract for Liverpool Paisley was promoted to assistant manager with Joe Fagan replacing him as first-team coach. Three years later, at 55 years of age, Paisley became the successor to Shankly.

Paisley record spoke for him, of course, as did his habit of signing top-class talent such as Graeme Souness, Kenny Dalglish and Alan Hansen. Though initially reluctant to take on the role, Paisley became a huge success and, apart from his first season, won at least one major trophy in each of his nine years as manager.

Hugely disappointed by finishing second in 1974–75, the team went on to win the league title and UEFA Cup in 1976. This period marked the beginning of Liverpool’s dominance of English and European football, as the team went on to become champions on six occasions – finishing second twice – as well as winning three League Cups, one UEFA Cup, one UEFA Super Cup, six Charity Shields and, most significantly, three European Cups. Apart from a fifth-place finish in 1981, Liverpool never finished lower than runners-up in the league with Paisley as manager.