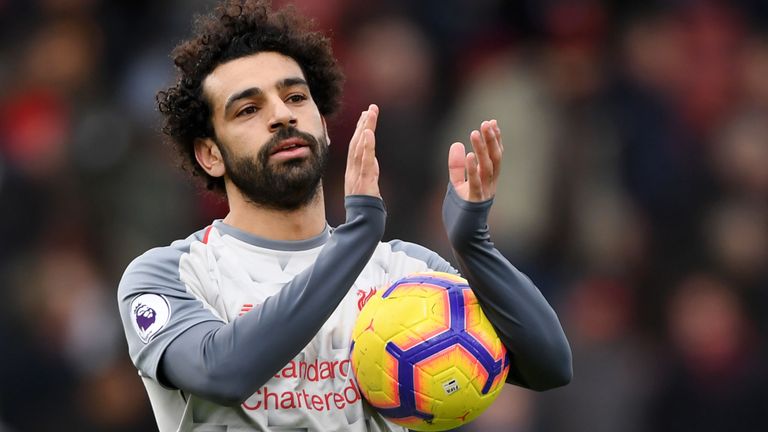 Africa has produced many great footballers, few of which have gone on to become absolute legends of the game. Many of these players came from poor background, but poverty did not stop these footballers from going on to take over the game at its highest level. Today we will have a look at some of the best African players in Premier League History.

Yakubu was a prolific goalscorer and had successful spells at Portsmouth, Middlesbrough, Everton and Blackburn. He managed to score 96 goals in the league,second highest for an African footballer in the Premier League. His quality of finishing and laid back approach made him an instant hit with all the teams he played for.

His career in English football started with Portsmouth in 2003,Yakubu helped Portsmouth win the 2002–03 Division 1(Championship) title, leading to promotion to the Premier League. He played 37 of Portsmouth’s 38 Premier League matches in 2003–04. Yakubu’s 16 goals made him the club’s leading goal-scorer, and joint-sixth highest scorer in the entire league.

Overall he managed to score 29 goals in 65 matches in the league over two seasons and was then sold to Middlesbrough in 2005. After playing two seasons for Middlesbrough and scoring 25 goals,Yakubu was transferred to Everton in August 2007 for a fee of £11.25 million on a five-year deal,which was at the time the most the club had ever paid for a player.

He then joined Blackburn in 2011.In his first season at Blackburn, he scored 18 goals, but the club were relegated to the Championship by the end of the season after a 1–0 home loss to in-form Wigan Athletic. After relegation was confirmed, Yakubu stated that he did not want to play Championship football and he left Blackburn.

Adebayor had some controversies during his time in the Premier League ,most notably against Arsenal. After scoring for Manchester City against Arsenal, he ran almost the full length of the pitch to the Arsenal supporters and celebrated in front of them causing an angry reaction from the Arsenal supporters. He was criticised for celebrating in this manner against his former club.

After spells at Arsenal and Manchester City, he joined Tottenham on loan in 2011. He scored 17 in 24 for Spurs in 2011-12 season and they signed him on a permanent basis. He stayed at Tottenham for three more years and scored 18 league goals in 59 apps during that period. He was then sold to Crystal Palace.

Since joining Premier League in 2017 with Liverpool, Salah has been in blistering form. In his first season with the club, Salah scored 32 league goals and won the PL Golden Boot. He was also voted the Premier League player of the year beating Manchester City’s Kevin De Bruyne. Even in this season he has made a good start and is the joint top scorer of the league after 15 games.

Mahrez’s incredible journey with Leicester Started in the January of 2014. He helped them win the Championship and promotion to the Premier League at the end of his first season. The following season he was one of the main reasons why Leicester made a great escape and survived from relegation.

But the best was saved for 2015-16 season, Mahrez along with Jamie Vardy were the sensation of the season as Leicester won the league defying all the odds. The very year he was voted the Algerian Footballer of the Year, the PFA Players’ Player of the Year, and was a member of the Premier League PFA Team of the Year.

In 2018 he joined the champions Manchester City and has already made himself an important member of his new team.

Okocha was known for his confidence, technique, creativity, and dribbling skills, as well as his use of feints, in particular the stepover.He is widely regarded as the best Nigerian player of his generation and one of the greatest African players of all time.

Okocha joined Bolton Wanderers on a free transfer in the summer of 2002. His debut season, despite being hampered by injuries, made him a favourite with the Bolton fans, with the team printing shirts with the inscription “Jay-Jay – so good they named him twice”. His heroics helped Bolton beat the drop and earned him the ”BBC African Player of the Year”.

Okocha was given captain’s armband next season  following Guðni Bergsson’s retirement. As captain he led Bolton to their first cup final in nine years where they finished runners-up in the 2004 Football League Cup to Middlesbrough FC.He left the club in 2006 for Qatar SC.

At Chelsea, Essien helped the club win the Premier League in 2006 and 2010, as well as three FA Cups and one Football League Cup in a 9-year spell at the west London club. In 2008, he appeared in the UEFA Champions League Final. He has won the Chelsea Goal of the season award twice, in the 2006–07 and 2008–09 seasons.

He was voted BBC African Player of the Year in 2006. Known for his box-to-box dominant displays, Essien’s tough-tackling style earned him the nickname “The Bison.”​

He became the first African in the Premier League to be nominated for FIFA player of the year and Ballon D’Or in the same season in 2007.

In the Premier League Kanu played for Arsenal,West Brom and Portsmouth. His goal scoring record was far from prolific with 44 goals managed in 197 games but his influence on the Arsenal team and his link up with others was second to none.

Kanu was named African Footballer of the Year for the second time in 1999, and in 1999–2000 he scored 17 times in 50 matches for the Gunners, including a hat-trick in fifteen minutes against Chelsea to turn a 2–0 deficit to a 3–2 victory. This made him an instant hero amongst the arsenal faithful. Kanu won the double, the fa cup and managed 10 games in 2004 which was the quota for another Premier League success for the Nigerian.

In 2004, he signed for West Bromwich Albion, scoring only 9 goals in 58 games. He left one year later to Portsmouth, becoming a crucial part of their famous 2008 FA Cup winning side.

Beginning his career at ASEC Mimosas, Touré moved to Arsenal in 2002, where he made 326 appearances for the club and was a member of the famous 03–04 ‘invincibles’ side.He was mainly a utility player in his first two seasons but it was again ‘The Invicibles’ season where he began to emerge.

Forming a formidable partnership with Sol Campbell, Toure played all but one game in the entire season. He was known for his occasional bursts out from centre back, galloping forward, rolling back the years from when he operated as an attacking threat rather than a defender. He was also terrific in Arsenal’s pursuit of the Champions League only for them to lose in the final.

In 2009, he moved to Manchester City, where he was joined a year later by his younger brother Yaya Touré, helping City earn its first league title in 44 years. In 2013 Touré transferred to Liverpool. He is one of the six players who have won the Premier League with two different clubs, having won it with Manchester City and Arsenal.

After spending 3 seasons with Liverpool,he left for Celtic in 2016.

Yaya Touré plays primarily in the centre as a box-to-box midfielder, often switching between offensive and defensive stances throughout matches. Joining in 2010 to link up with his brother Kolo,Yaya Toure has now played more than 280 matches for Manchester City winning Premier League twice,League Cup twice and a FA Cup.In his first season at the club,the Ivorian scored the goal that settled the Manchester derby FA Cup semi-final at Wembley and it was Yaya again who scored the winner in the final against Stoke and writing himself into Manchester City folklore in the process.

Yaya was inspirational again in the 2011/12 season, continuing his knack of making key contributions at crucial moments.He scored vital goals against Newcastle in City’s penultimate game of the season to put Roberto Mancini’s men within touching distance of the league crown.

In the summer of 2004, Drogba moved to Premier League club Chelsea for a club record £24 million fee, making him the most expensive Ivorian player in history. In his debut season he helped the club win their first league title in 50 years, and a year later he won another Premier League title.He won the Premier League again in 2010.

In March 2012, he became the first African player to score 100 Premier League goals,and also became the only player in history to score in four separate FA Cup finals the same year, when he scored in Chelsea’s win over Liverpool in the 2012 final.He also played in the 2012 UEFA Champions League Final, in which he scored an 88th-minute equaliser and the winning penalty in the deciding shoot-out against Bayern Munich.

He left Chelsea in 2012 only to return back in 2014 as a free transfer from Galatasaray.He featured 40 times that season as they won the League again.

Drogba announced that Chelsea’s final game of the 2014-15 season against Sunderland would be his last as a Chelsea player.He started the game as captain and was substituted with injury after half an hour, being carried off by his teammates in an eventual 3–1 win.