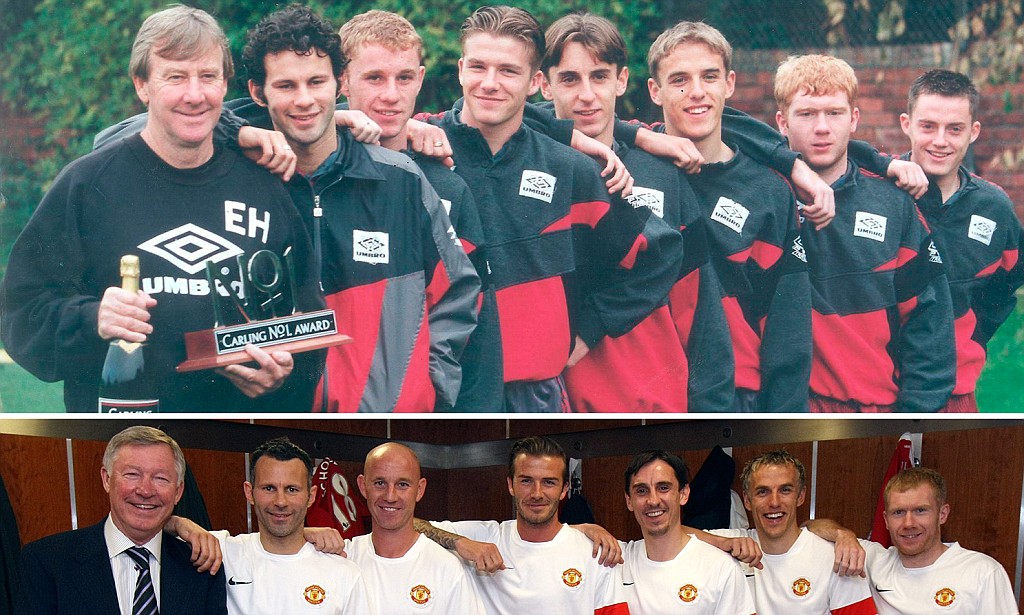 In the recent times, the dynamic of the football world has changed drastically from what it used to be even a decade back. With the emphasis shifting to financial empowerment and dabbling in cash rich squad building for reaching the top, more than investing in the youth of the day, the way football is seen has changed.

Many would argue, the prime innovator of breaking the bank regularly in the recent past has been Manchester United. With their big money moves of Paul Pogba, Romelu Lukaku and Angel Di Maria, among others, Ed Woodward has not stopped short at opening his coffers. Yet, there was a time, when things were different. A time, when the Manchester club was built around a spine which costed them nothing. And gave them, everything.

The hands of the clock turn counter-clockwise. The year is 1995. Opening match-day of the 1995-96 season, as United under Sir Alex Ferguson travelled to Villa Park with a rather unfashionable squad. A squad that consisted of quite a number of fresh faces. And Ferguson fielded majority of them against a stalwart Aston Villa side. An act of courage turned to an act of stupidity as the Villains gave United a reality check handing them a 3-1 defeat.

The loss in the season opener, set forth a media maelstrom. Thrusting Ferguson’s tactics into question, Liverpool great Alan Hansen, then a football pundit on TV, remarked, “You can’t win anything with kids”. How he wishes he had not said that. To this day, Hansen’s comment remains one of the classic examples of premature judgement. United would go on make history by winning the Premier League and the FA Cup with the youngest squad age till then, of 26 years and 137 days, a then record which would go on to be broken by Chelsea in 2004-05. At the core of it all, was a bunch of young boys, burning, brewing, ready to take on the world. A bunch, we fondly call today as, the “Class of 92”.

Homegrown talent is a department, United have always paid special attention to. Over the years the club has produced incredible talents from their famed youth academy who went on to garner the highest of acclaims. The first bunch of dudley boys who went on to become legends were the legendary Busby Babes of the 50s. However, a mishap took them away from the world prematurely.

Four decades later, under the stewardship of gaffer Sir Alex and the able hands of assistant coaches, Brian Kidd and Eric Harrison, bloomed the so-called Fergie’s fledglings. There have been many groups of United players who had moved out of the academy and into the first team, that were dubbed the aforementioned pronoun. However the ones who stand out, the ones who stood the test of time, the ones who swept the world off its feet were six teenagers who graduated in 1992.

Namely, the first four youngsters to join the main team in 1992, were David Beckham, Nicky Butt, Ryan Giggs and Gary Neville. Later came, the ginger prince, Paul Scholes and Phil Neville. These six would go on to form the spine, around whom the rest of the team would be built over the years.

Starting with the domestic double in the 1995-96 season, the class of 92 went on a flurry of accolades over the years, winning titles on the trot for their old man. With Giggs on the left-wing, Becks on the right, Scholes at the centre of things and Gary at right back, the Old Trafford outfit had found a chemistry that was beginning to instil fear all across Europe.

The highlight of the team came in the 1998-99 season as the Red Devils would go on to create history. With the core of the first team comprising Fergie’s boys, the manager brought in a commendable partnership of Dwight Yorke and Andy Cole. The back was bolstered with the superstar signing of Japp Stam and on the net were the able hands of Peter Schmeichel.

Firing on all cylinders, the class of 92 inspired the club to unprecedented success, as they emerged victorious with the treble. No club in the history of England had achieved this feat before. The cabinet boasted the Premier League title, the FA Cup and the Champions League, all in one season.

What followed over the next few years was an exodus of half of the boys who had conquered the whole world. David Beckham was involved in a fairly controversial time. It was a particularly low point in the career of the blonde winger. Having been sent off in the 1998 World Cup quarter-final against Argentina, a match that the three lions eventually went on to lose, David was publicly ostracized. All the troubles began for him at the club as Ferguson as respite, sent him to America on vacation.

He returned as a married man. What followed was a string of poor, inconsistent performances over the next few years, with the grand old Scot claiming David started to think of himself as bigger than the club. The hiatus of it all was a fiasco in the dressing room. A flung boot, Beckham’s face, and Ramon Calderon was waiting in the sidelines. Before you know it, Beckham was a Galactico.

The Class of 92 numbers started to dwindle as Ferguson recalls in his autobiography, the moment of selling Phil to Everton. In an excerpt, he says that Phil was a Mancunian through and through, but just not cut out for the club. In a tearful good-bye, the Neville brothers were separated as the younger one joined the Merseyside blues.

Furthermore, was the departure of Nicky Butt after seeing his time cut short by the resurgence in the final stages of Roy Keane and rise of the precocious young Darren Fletcher at the heart of the midfield. Of the six graduates from 92, only three remained. These three would go on to acquire legendary status at the club. A trio who would come to be known as GSN or Giggs-Scholes-Neville. A story goes about Inter Milan trying to sign Paul by offering him a blank cheque. He courteously turned it down, remarking, if the Nerazzuri wanted him to play for them, they’d have to buy the whole club.

Personifying loyalty in a time when big money transfers were starting to bloom, these three became cult heroes among the Stretford faithful. United had acquired the services of a young Portuguese winger named Cristiano Ronaldo for a modest fee to ply his trade on the right-wing. With Giggs continuing his handiwork on the left, the Red Devils were rejuvenated once more.

With age comes wisdom, as Paul was moved up the pitch from the centre to a more no. 10 role. A saying goes like, “By playing Scholes in the hole, Ferguson had got himself out of one”. Neville continued his brutality at right back, quickly sparking a rivalry with Liverpudlian counterpart Jamie Carragher. Jose Mourinho and Arsene Wenger had come to the scene to challenge Sir Alex’s claim to the throne. With the innovations, the Scot safeguarded it from his adversaries for the years to come.

Post retirement of all the players, the Class of 92 now co-own Salford City, a club currently in the fifth tier of English football. In their playing years and even today, well past their halcyon days, they remain a brand. A tale of the kids who went on to win the whole world.

A United faithful with an uncanny passion for digging up stories from the days gone by.