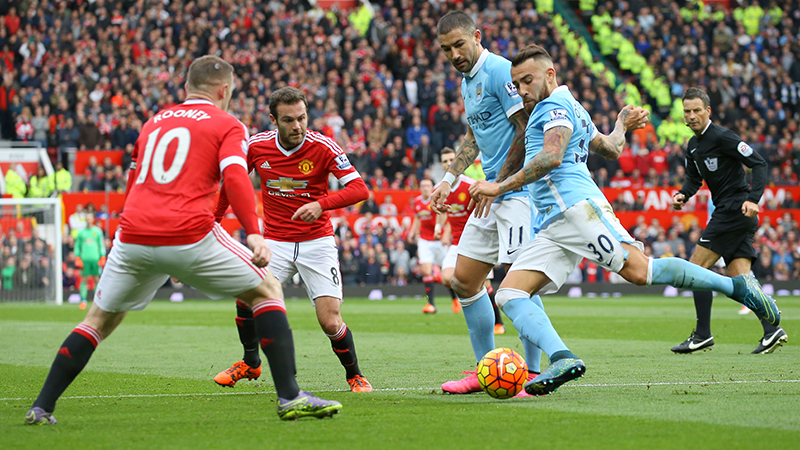 Its a must win game for both the Manchester Sides on a super sunday.

Its the Red Devils taking on their noisy neigbours Manchester City. 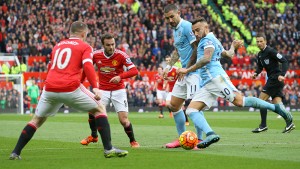 The first meeting between the two Manchester Sides occurred on 12 November 1881,

At this time, the clubs were just two of many fledgling sides in the Manchester area, and the fixture had no special significance. Both clubs grew in stature as the 1880s progressed, leading to their first meeting of the 1890s being billed as “a meeting of two local clubs, [Ardwick (City)] just rising to the highest standard in the football world whilst [Newton Heath] are nearly in the front rank”.

During this period both clubs made unsuccessful attempts to gain election to the League (Newton Heath in 1889, 1890 and 1891; Ardwick in 1891). Admission to the Football League finally came in 1892. Newton Heath joined the First Division, and Ardwick the new Second Division.

As of 12 April 2015, there have been 169 competitive meetings between the teams. United have won 70 and City 49, the remaining 50 games finishing as draws.

The biggest victories have been to City who have won 6–1 on two occasions in the official league (both times in the away fixture at Old Trafford) on 23 January 1926 and 23 October 2011.

But on 14 April 1941 during a war league derby match at Maine Rd, United beat City 7–1, which remains the biggest victory between the two sides overall, this result has been omitted as the official league was suspended but the derby still continued.

The largest attendance for a Manchester derby was 78,000 on 20 September 1947, a time when both clubs were playing at Maine Road

Wayne Rooney has 11 goals and he is the leading goalscorer in the Manchester derby , while Sergio Aguero has 8 goals so far .

(four days after the 50th anniversary of the Munich air disaster; a well-observed one-minute silence preceded the match).

Darius Vassell and Benjani Mwaruwari scored for City in the 24th and 45th minutes respectively, and Michael Carrick scored a consolation goal for United in the 90th minute.

It was the first time since April 1974 that City had beaten United in the league at Old Trafford and the first time they had won both league derby games since the 1969–70 season.

United prevented City from winning a third consecutive derby match in the first derby of the 2008–09 season, Wayne Rooney scoring the game’s only goal. Cristiano Ronaldo was sent off in the same game for a bizarre handball. Ronaldo and Carlos Tevez then scored in the return match at Old Trafford to give United a 2–0 win

Controversy was generated prior to the start of the 2009–10 season, when City signed Carlos Tevez after his contract with United ended, and erected a billboard reading “Welcome to Manchester” at the top of Deansgate.

Alex Ferguson proclaimed the 2009–10 Manchester derby at Old Trafford as “probably the best derby of all time”.

Manchester United won this game 4–3 after Manchester City had equalised three times only for Michael Owen to score the winning goal after 95 minutes.The match was voted the greatest Premier League game at the Premier League 20 Seasons Awards in 2012

The Rivalry Just Got Better

On 23 October 2011, Manchester City beat United 6–1 at Old Trafford, giving the latter their first defeat of the season. Jonny Evans was sent off in the 47th minute after foulingMario Balotelli, with the score at 1–0 to City. United pulled a goal back at 3–0 down before three goals for City sealed their victory.

There was also a spat between City boss Roberto Mancini and Alex Ferguson after a challenge on Danny Welbeck by Nigel de Jong. Ferguson claimed that Mancini harangued the fourth official Mike Jones throughout the match, while Mancini laughed off the incident, sarcastically claiming Ferguson never talks to, or harangues the referee an offence Ferguson has been found guilty of on numerous occasions, most recently in 2011 for which he received a five-match ban

The first Manchester derby of the 2012–13 season was won by Manchester United in the dying minutes of the game. United went ahead with two early goals from Wayne Rooney, before City came back and levelled the match with goals from Yaya Touré and the equaliser from Pablo Zabaleta in the 86th minute. Robin van Persie scored from a free kick that took a deflection off of Samir Nasri in the 92nd minute, to seal the win and three points in the league.

Manchester United’s victory ended Manchester City’s run of being unbeaten in 37 games. During the celebrations following the late winner by Robin van Persie,

Rio Ferdinand was hit by a coin thrown by a fan, causing Ferdinand to suffer an injury near his left eye. Another fan invaded the pitch and attempted to confront Ferdinand, only to be restrained by Joe Hart.

City won the second derby of the season at Old Trafford, the first time they had won two away derbies in a row since the 1970s.

It was the first time in twenty-six years that the Derby had been contested by two new managers: Manuel Pellegrini for Manchester City and David Moyes for Manchester United

The first Manchester derby of the 2013–14 season was won by City 4–1 at the Etihad on 22 September 2013. Sergio Agüero opened the scoring on the 16th minute followed by a goal from Yaya Touré just before half time. In the second half, Agüero scored his second followed by a Samir Nasri goal three minutes later. Wayne Rooney scored a late free kick for United as a consolation goal.

Manchester City went on to do the double over United with a third consecutive win at Old Trafford on 25 March 2014, and won the Premier League for the second time in three seasons.

During the 2014-15 season, City defeated United 1-0 at Etihad Stadium in November 2014,but United won their next encounter at Old Trafford in April 2015 with a final score of 4–2, a game which City goalkeeper Joe Hart dubbed “one of my worst days in a Man City shirt.”

The first Manchester derby of the 2015–16 campaign, contested at Old Trafford, ended in a 0–0 draw.

This was the first time the derby had ended without any goals since 2010.