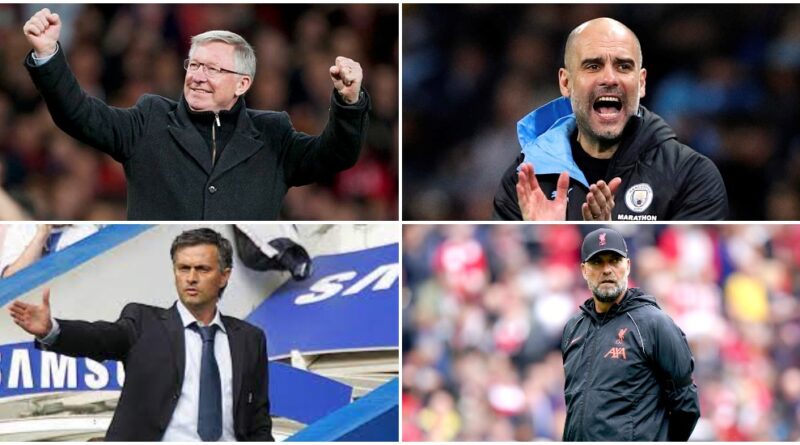 Premier League is one of the toughest football leagues in the world, not just for players but also for managers. Only the greatest of the managers are able to prove their worth in this league. In this article, let us have a look at some of the greatest Premier League managers of all time.

Considering the impact on their clubs, successes, win percentage, and playing style. here are the ten greatest Premier League managers of all time.

Roberto Mancini is a manager who has cemented his name in the history books for various reasons. With him, Manchester City won their first Premier League title, and it was quite a dramatic way to win as well. Manchester City didn’t just snatch the title away from their rivals, Manchester United, on the last day of Premier League, they snatched it in the dying seconds of the 2011-12 season.

It was undoubtedly the most exciting finish Premier League had ever witnessed and thanks to Roberto Mancini, Manchester City made history on that day. The Italian also won the FA Cup and Community Shield in his managerial career. He also has an impressive win percentage in the Premier League with 59.16% as a manager.

Most people remember Kenny Dalglish for his time as a manager with Liverpool, but he also had his moments with Newcastle and Blackburn Rovers. He won the Premier League with the Rovers in 1994-95 which was a major accomplishment considering the squad did not have many star-studded players. With that, he also became only the fourth manager after Tom Watson, Herbert Chapman and Brian Clough to win the English top-flight division with two different clubs.

King Kenny was a dominant manager, especially with Liverpool as he enjoyed a 60.9% win rate in his first tenure with The Reds. He did wonders with Blackburn Rovers as well, with a win percentage of 52.6. With Newcastle United, however, he didn’t have a lot of success with just 38.5% wins under his belt. His second tenure as Liverpool manager was also below average.

Carlo Ancelotti has enjoyed success in the Premier League as a manager and his attacking style of play helped Chelsea break records at that time. He was there for just a couple of seasons in the Premier League, but he left a huge mark with his managerial skills. He won the league in his debut season with Chelsea but was sacked at the end of his second season.

His tactics helped Chelsea become the first Premier League side to score over 100 goals. They only conceded 32 goals in the season which shows how defensively sound they were. He has a whopping 61.47 win percentage as a Chelsea manager, which was the third-highest at that time, only behind Sir Alex Ferguson and Jose Mourinho. He also managed Everton for two seasons between 2019-21, with the club finishing in 12th and 10th place respectively.

Antonio Conte is a serial winner and he proved it with his stint with Chelsea. Much like Carlo Ancelotti, Antonio Conte managed Chelsea for just two seasons and his impact was instant. Chelsea won the 2016-17 season under his management which also saw them set a number of records.

They won the season with 30 wins which was a Premier League record at that time. He was, however, sacked at the end of the 2017-18 season for his issues with players and the fact that Chelsea missed out on the Champions League spot. His dominance with the Blues can be estimated with the insane win percentage of 65.09.