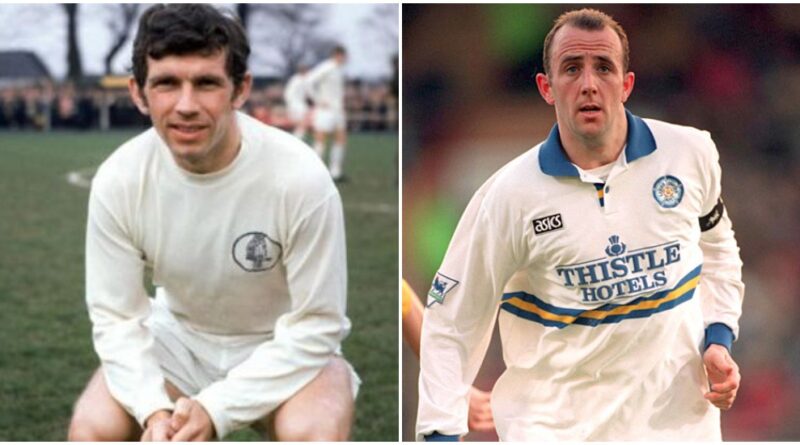 It is always a thankless task selecting the “Greatest” anything, as people are influenced, sometimes by favouritism from a popularity point of view. Sometimes it’s simply by the fact that the players were from an era before a person started supporting the club and in many cases before they were even born. However, while selecting our greatest Leeds United midfielders ever, we took into consideration various factors, to make the list as accurate as possible.

Taking into account, fan surveys, online polls, expert opinions and the impact they had on the club, here are the ten greatest Leeds United midfielders ever.

Gary began his career at Leeds United as a schoolboy and played a key part in the promotion-winning campaign of 1989/90, before then adding further success by helping the club to win the First Division title two years later, in 1991/92.

During that title-winning season for the Whites, Speed formed part of one of the greatest midfield line-ups in the modern era, taking his position in the starting XI most weeks alongside Gordon Strachan, David Batty and Gary McAllister.

From 1988 to 1996, the midfielder played 312 times for the club, scoring 57 goals across a number of competitions. He left Leeds to join Everton in 1996. Gary Speed will always be remembered as one of the greatest Leeds United midfielders ever.

Bowyer moved to Leeds United from Charlton Athletic in July 1996  for a then British record fee for a teenager of £3 million. A hard-working player, he was hard in the tackle with an eye for goal as well.

Initially, he took some time to settle, but soon his performances led to him being voted United’s Player of the Year for 1998/99. Bowyer showed magnificent form in the first half of the 1999/2000 season, he was a star at home and in Europe as Leeds made the semi-finals of the Champions League, and he almost finished top scorer in the competition.

He was one of the best players in the Premiership throughout 2000/01, and was once again voted United’s Player of the Year. He left Leeds in 2003 for West Ham.

Leeds bought him after a four-year spell at Everton and his impact guided us to safety on the last day of the 1961/62 season. Collins captained Leeds to their first-ever FA Cup final at Wembley in 1965, after winning numerous honours during a decade at Celtic.

Dynamic, inspirational and a ferocious tackler, Collins drove Don Revie’s youngsters to the Division Two title in 1964, before almost leading them to the double in the following campaign.

His efforts won him the Footballer Of The Year award and a recall to Scotland’s team. Winning 31 caps in all, tragically he shattered a thighbone against Torino in Leeds’ first European campaign, an injury from which he never fully recovered.

Batty has a reputation as a tough-tackling, short-pass making hardman but his 42 England caps testify that there’s more to this former Leeds City Boys start than simply winning the ball and laying it off. Batty was a crucial part of the Howard Wilkinson/title-winning era.

A superb ball-winner and passer he gained 14 of his 42 full England caps with Leeds before a surprise £2.75m transfer to Blackburn Rovers in 1993. He was their Player of the Year and added a further Championship medal to the one already won at Leeds in 1992. Batty joined Newcastle United for £3.75m in 1996 where he narrowly missed out on third title. He returned home for £4.4m in 1998 for another 6 year stint at the club.

His one fault however was the lack of goals he scored. Over the course of his two spells at Leeds United, Batty made over 300 league appearances, finding the back of the net just four times. In his second spell with the club, his lack of goals led to chants of ‘shoot’ from the Elland Road faithful every time he picked up the ball, regardless of how far away from goal he may have been. But David Batty was also a master of pinpoint passing and was often the catalyst for many Leeds United goals.