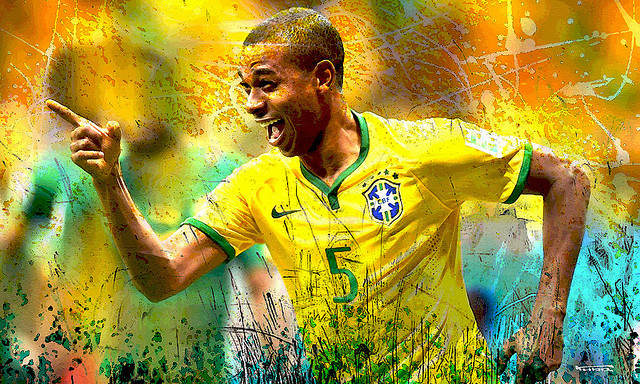 The Brazilian star made the move for Manchester City as their First signing of the summer on 6th June 2013 worth £34m with a four year deal. At Shakhtar Donetsk he was voted by the fans as the best Brazilian player to ever play for the team. Now it was the time for him to prove that he’s worth every penny which Blues spent on him. He chooses Jersey no. 25 at City, though he used to play with number 7 at Shakhtar but James Milner already occupied it. 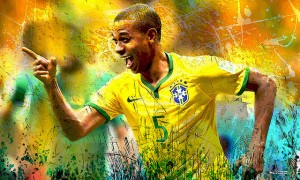 Fernandinho made his Premier League debut on 19 August 2013 against Newcastle United in a 4–0 home win. He was really praiseful in match, fans were happy to see him playing with his full ambition towards the club.
On December 14, 2013 he scored his first goal for the Blues in a 6-3 win over the Gooners at home and was also named as the Man of The Match for his fabulous performance.
On 2nd March, Fernandinho appeared for City in the Football League Cup final against Sunderland, where he won his first trophy at England with a 3-1 Win.
Though still he wasn’t a regular starter for the Blues. He was used as the defensive tactic substitute by the manager.

In his first 8 appearances for City Brazilian had an 86.2% pass success rate, which is quite impressive.
Slowly and steadily Pellegrini started using him over Barry. With his crucial attacking passes Fernandinho was sometimes used as a attacking player when team struggles to score and create chances.

His tackling was impressive in comparison to Barry, supporting the manager’s decision to choose him over Barry.Later and sooner, the Brazilian became an Ace for the Sky Blues with his potential output. His tackling, passing,enthusiasm, defensive mind started to be the secret reason for City’s balanced mid field.Being a midfielder, Fernandinho has to cope up with both strategy. Defensive as well as Attacking.

Fernandinho in 2014 finally won the Premier Title with Manchester City, which was second to them after 2012’s Title win.
Fernandinho’s best career spell is also counted in the same season, 2013-2014.Fernandinho is companied by Ivory Coast’s international, Yaya Toure. Who is much more an attacking minded Central Midfielder. Because of Yaya being really impressive in attack, Fernandinho is opted to stay down the field and maintain the width of the  team with his presence in the middle while Yaya is up-forcing the team’s attack.
Fernandinho is basically praised for his technical mind in defending. As being a tactician in defending, Fernandinho plays crucial part in attacking as well. He’s one of those central midfielders who create good attacking chances as well.

The 2014-15 season wasn’t a memorable season for the Brazilian, as he was even out with couple of injuries that season and recently arrived after the international break, in which Brazil had a devastating time. The morale was counted as the reason for his bad performance in the team.This current season 2015-16, he has been seen back to his top form. Being the Man of the Match for a couple of time this season. Manuel himself being heard with good words on Fernandinho for his great display towards the team.
The star has scored 2 goals in 20 appearances so far for the Blue’s. Totalling it to 10 goals (EPL) in Blue’s Jersey under 86 appearances.

Playing for 1700 minutes in 19(1) appearances, he has scored 2 goals and assisted one this season.
Having an impressive successful passing rate of 88.2%
While observing the player in his defensive duties he’s not less worthy with 3.5 tackles per match this season. Interception being 1.9 per game. Clearances counted as 1.5 per match and 2.0 dribbles every game.Brazilian is one of those player’s who do not liked to be subbed off. In his recent interview he has opened up himself and told to media that he loves to play every minute of game and literally gets annoyed if he’s been subbed off by the manager.”I just love to play and always want to be involved,” he said via the Manchester Evening News.”Occasionally when I come off during a game I get a little bit angry. But it’s only because I want to play in every game and every minute to help my team-mates.”Fernandinho has played MORE MINUTES than any other Man City player this season.His quality on the ball is often overlooked, but his range of passing is worth all kinds of praise.
Pellegrini will be delighted to see his big-money signing from 2013 continuing to repay the fee.