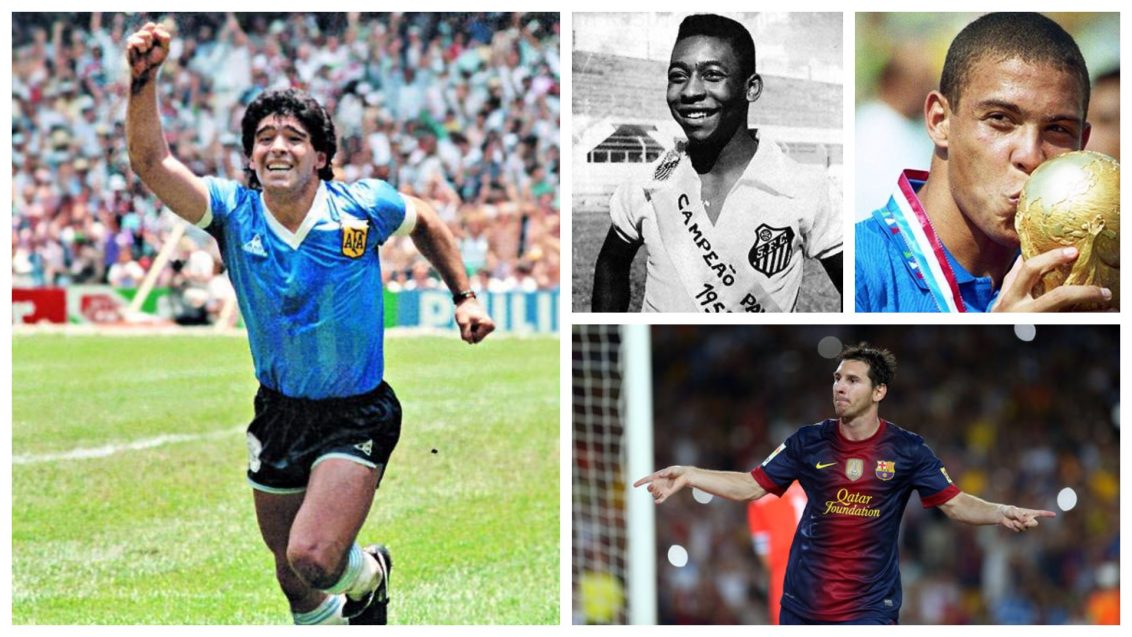 In football the striker is the player whose main goal is to score as many goals as possible. There have been many great strikers, but who are the greatest strikers ever?Checkout our list of the Best Strikers Of All Time!

There was a debate whether to put Lionel Messi in the list or not,as he doesn’t play as a genuine striker anymore.But we decided to put him in the list as he had played as a striker in the past,both for Argentina and Barcelona.

Best Strikers Of All Time are- 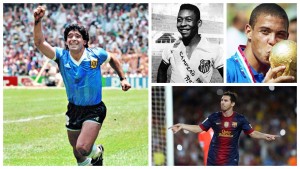 Ajax and Milan hero, van Basten was a great striker. Ajax won the Dutch Championships and the Dutch Cups twice each with van Basten leading the attack. He was a powerful striker who was amazing in the air and possessed wonderful close ball control. He won the European Championship with Holland in 1988, becoming top scorer of the tournament with 5 goals. He was a very talented player but was forced to retire his career early at age 30 due to an ankle injury.

Romario was a proven finisher with the rate in which he scored goals for various clubs and the Brazilian national team.He is one of the few players that scored more than 1000 goals. He was the striker of Barcelona’s dream team during the early 90’s that was coached by Johan Cruyff. He took Brazil to the 1994 FIFA World Cup triumph, winning the golden ball in the tournament. In the same year, he was named the FIFA Player of the Year.

Romario played for quite a number of clubs, including Barcelona and PSV Eindhoven, though he is mainly linked with Vasco da Gama. He has 70 caps for the national team with 55 goals, becoming the third all-time highest goal scorer for his team. Romario has over a 1000 goals, making him a part of Best Strikers Of All Time! 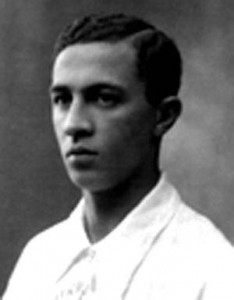 Friedenreich played even before WWI, from 1909 to 1935. There is not much footage of him but his number of goals is amazing. There is confusion about the exact number, some say he scored 1239 goals in 1329 games, while others suggest it were 1329 goals in 1239 games. Friedenreich was nicknamed “The King of Football” before Pelé took this title.Friedenreich was the top scorer in Liga Paulista for nine seasons.

One of the greatest players to play the game,Lionel Messi is the only active footballer to make the list,just goes on to show how great a player he is!He has already won 5 Ballon D’Ors,which is more than anybody footballer has ever achieved.Messi has already scored more goals in his 11 years career at Barcelona, than Maradona scored in his entire 20 year career. He is also Barcelona’s all time leading goal scorer!

Footballers Who Could Have Played For A Different Nation 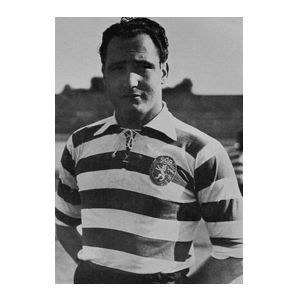 We have a Portuguese striker with an unbelievable goal per game ratio, at one time he managed to score nine in one match.Fernando Peyroteo is the player with the highest goals per game ratio (1.68). Compare this with Pelé who has a ratio of 0.96 goals per game. Peyroteo played as a striker of Sporting during the 40’s where he scored 331 goals in 187 games. Although it was a different time without European football, he remains one of the greatest strikers ever.

Peyroteo played for just one club in his entire career. He won eleven major titles with the club and was the league’s top scorer six times. He scored 14 goals for Portugal in 20 matches.He is 6th in Best Strikers Of All Time!

Eusébio, nicknamed “The Black Panther” was the first big player born in Africa.Eusebio managed to show he possesses world class technical skill and goal scoring ability when he played for Benfica and the Portugal national team. He remains Benfica’s all-time top scorer having scored 638 goals in 614 games for the club.

Eusebio was in the Portugal team that emerged third in the 1966 World Cup. His 9 goals made him the top scorer of the tournament. Eusebio won the Ballon d’Or in 1965 and was the first to win the European Golden Boot in 1968. He was the Primeira Liga top scorer for a record seven times.

Maradona only on four, surprised? No this list is about the best strikers ever and Maradona was more an attacking midfielder, however Maradona was still a great finisher, he could score out of incredible positions, with incredible shots but he also created a scoring change from nowhere by dribbling past defenders like they were not there. It helped him score a lot of goals.

The Argentinean’s low centre of gravity allowed him to do things that very few others players could manage. The fact that he was physically strong, allowed him to hold off his opponents, before setting up a team-mate or taking a shot himself. He will go down in history in the unforgiving hearts of England fans because of his ‘Hand of God’ goal and then his next goal.

Ronaldo was the greatest striker of the late ’90s and early ’00s. In this period he was just unstoppable, he could score from any position at any moment. The Brazilian always scored a lot of goals at any team he played with. At the 2006 World Cup Ronaldo scored his 15th World Cup goal and became record holder of scoring the most goals at World Cups(at that time).Easily putting him in the list of Best Strikers Of All Time

Ronaldo played for a number of top professional clubs in Europe. He joined Barcelona after a transfer from PSV Eindhoven in 1996, though he stayed at Camp Nou for just one season. Inter Milan signed the striker in 1997 and he later moved to Real Madrid then AC Milan. One thing was consistent though, Ronaldo scored goals, goals that saw him receive the award for top goalscorer in the various leagues he played.

One of the focal points of the ‘Magical Magyars’ who are widely regarded as one of the most fluid and talented sides to have ever been created, Ferenc Puskas is considered one of the true icons of 20th century football. Alongside Di Stefano, he was near unstoppable, scoring 516 goals in only 520 appearances in Hungary and Spain.

He led the Hungarian team to winning the 1952 Olympics and helped them advance to the 1954 FIFA World Cup final. He was then named the best player of the 1954 World Cup.However, it was at Real Madrid where Puskas became a legend, winning the European Cup on three separate occasions and five La Liga titles in a row. He is officially ranked by the IFFHS as the top goal-scorer of the 20th century.He finishes 2nd in the list of Best Strikers Of All Time!

Who else?Our leading striker of all time comes as no surprise at all.The Brazilian scored 1281 goals in 1363 games, a number which hasn’t been repeated by any player until today. Pelé scored goals on several ways, always looking for a possibility to shoot on goal. He was a great header although he wasn’t the tallest, he scored several bicycle goals but the way he scored most of his goals was with he’s great kick, Pelé could shoot very well with both of his legs.

His trophy list is also one to be greatly admired, with three World Cups, 16 Brazilian titles , two Brazilian Cups, among many others, amassing 40 trophies in total. He is simply, the greatest striker ever!

3 Greatest Players Ever Of The Current Premier League Clubs

We missed any other legendary strikers? Let us know in the Comments below!