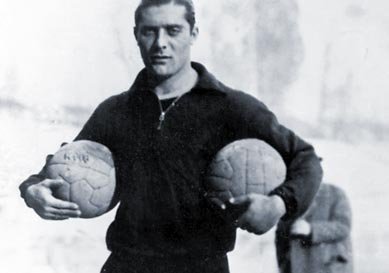 Mario Balotelli joined Inter Milan in 2007 at the age of 17. He spent 3 fruitful years with Inter winning 3 Serie A titles,Coppa Italia and UEFA Champions League.He appeared in 86 matches and scored 28 goals, before he sealing a switch to Manchester City.

After 3 good seasons with City ,he joined AC Milan in 2013.At AC Milan, Mario had his ups and downs, spending a year and a half there before the club decided to sell him to Liverpool. He made 54 apps and scored 30 goals during his time with AC Milan.

He had a rough time with Liverpool and was loaned back to Milan in order to revive his career in the 2015-2016 season.His loan spell wasn’t fruitful as he scored only 1 league goal during that time and was later sold to French club Nice.

Not many players have shifted between these two clubs as frequently as Aldo Serena.Serena had 4 different spells with Inter and 2 spells with Milan including 1 as a loanee.

Serena was a fit, strong, dedicated, hard-working, and athletic centre forward who excelled in the air.At Inter, he reached his peak in 1989 when his 22 goals contributed to claiming the Scudetto and saw him finish as their top scorer that same season. His transfer to Milan in 1991 still provokes anger among Inter fans.

Although Serena’s first spell with Milan saw him help the team win the Serie B title and achieve Serie A promotion in 1983, as he scored 8 goals in 20 appearances, his second spell with Milan was less successful; despite winning another Supercoppa Italiana in 1992, and another two Serie A titles in 1992 and 1993 under manager Fabio Capello, he was used with less frequency due to several injury struggles, only making 10 appearances over his two final seasons, and he failed to score in Serie A during his second spell with the club, ultimately retiring from professional football in 1993.

Crespo first joined Inter Milan in 2002,but he was shelved for four months by injury in early 2003.He was then sold to Chelsea in 2003.

After José Mourinho took over as Chelsea manager for the 2004–05 season, Crespo became surplus to Chelsea’s plans following the arrival of Didier Drogba and was loaned to Milan, as requested by then manager Carlo Ancelotti. He scored a total of ten league goals, and scored twice in the 2005 UEFA Champions League Final in a defeat to Liverpool.

After his time at Chelsea,the Argentinian joined Inter,first on loan followed by a permanent deal, and helped them win three Serie A titles, after scoring 45 goals in total.

Roberto Baggio  is an Italian former professional footballer who mainly played as a second striker, or as an attacking midfielder, although he was capable of playing in several offensive positions.

He is one of the rarest players to have played for all 3 Italian gaints – Juventus,Inter Milan and AC Milan.

He joined Inter Milan in 1998,where he spent two unsuccessful seasons before leaving the club in 2000.

Ibrahimovic joined Inter Milan from Juventus in 2006.Ibrahimović revealed that he had supported Inter when he was young.His time with Inter Milan was a huge success as he won 3 consecutive Scudetto in his 3 seasons with the club.He played 117 matches and scored 66 goals for Inter.

In the summer of 2009, he transferred to Barcelona, before moving back to Serie A football the following season, joining AC Milan in a deal that made him one of the highest-paid players in the world.He won another Scudetto with Milan in the 2010–11 season.Zlatan played two seasons for AC Milan, netting 56 goals from 85 appearances.

Pirlo began his club career as an attacking midfielder with his home-town side Brescia, where he later helped the team to win the Serie B title and obtain Serie A promotion in 1997. His promising performances led to a move to Internazionale in 1998, but he struggled to gain playing time at his new club, due to his lack of pace, as well as heavy competition with other players in his position, and was subsequently sent on loan in 1999. Despite successful spells with Reggina, and Brescia once again, Pirlo was still unable to break into Inter’s starting line-up, and was sold to cross-city rivals Milan in 2001.

It was Carlo Ancelotti who recognised Pirlo’s talent and deployed the player to the deep-lying playmaker role, where he matured and became one of the best midfielders in the 21st century.

Seedorf is one of the most decorated Dutch players ever, and has won domestic and continental titles while playing for clubs in the Netherlands, Spain, Italy and Brazil.He is considered one of the most successful players in UEFA Champions League history, as he is the first, and currently the only, player to have won the Champions League with three different clubs – once with Ajax, in 1995, once with Real Madrid, in 1998 and twice with Milan, in 2003 and 2007.

He joined Inter Milan in 2000 and spent two fairly unsuccessful seasons with Inter as he failed to win any silverware.He amassed 93 appearances, scoring 14 goals in a Nerazzurri shirt.

After two years with Inter, Seedorf moved to their city rivals Milan in 2002 in an exchange with Francesco Coco.He earned his legendary status with AC Milan, where he appeared in 431 matches for the Rossoneri, scoring 63 goals and winning two Champions League trophies with Milan along the way.

Collovati was regarded as one of Italy’s best defenders during the 1970s and 1980s. An elegant, physically strong, and dynamic player.

Brought up through the A.C. Milan youth academy, he debuted in Serie A with the rossoneri in the 1976–77 season, in which he played eleven times and even won the Coppa Italia. In the next season he played more regularly but his definitive moment came during the 1978–79 season in which, thanks to his 27 appearances, he won the scudetto. It was one of the few joys he had at Milan, because following the 1979–80 season, Milan was relegated to the Serie B . Unlike other players, Collovati stayed on with Milan in the Serie B and played 36 games scoring two goals, winning the title that season, and helping the club to gain Serie A promotion the following season.

Back in Serie A the next season, Milan won the Mitropa Cup with Collovati serving as the team’s captain, but surprisingly was relegated to Serie B once again. On this occasion, Collovati decided to join local rivals Inter Milan in 1982 as he thought that playing in Serie B might cost him his place in the national squad for the World Cup.He eventually went on to win the World Cup with Italy in 1982.

He spent 4 seasons with Inter but failed to win any trophy.

One of the least hated footballers in the world,Ronaldo joined Inter Milan in 1997.During his five-year tenure at Inter, Ronaldo was awarded with Ballon d’Or in 1997 and won the UEFA Cup in 1998.

Injuries limited his appearances for the club,he is still regarded as Inter’s legend with 49 goals in 69 matches.

He then joined Real Madrid in 2002 where he spent five seasons.The Brazilian legend then made a strong start in AC Milan after the move from Real Madrid during the winter transfer window of the 2006/07 season. He scored seven goals in 14 appearances, before another unfortunate injury sidelined the Brazilian legend. 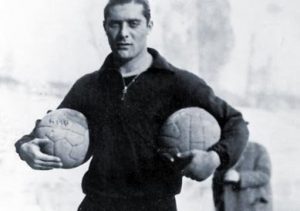 Meazza is widely considered one of the best players of his generation, and among the greatest of all time, as well as being regarded by many in the sport as Italy’s greatest ever player.Due to his technical skill, prolific goalscoring, and creative ability, he was often given the nickname “il genio” (the genius) by the Italian press during his career. A prolific forward, Meazza won the Serie A top-scorer award on three occasions in his career; with 216 goals in Serie A, he is the fourth all-time highest goal scorer in Serie A, alongside José Altafini, and with 33 goals, he is also the second highest goalscorer for the Italian national team.

San Siro, the principal stadium in his native city of Milan, which is today shared by two of his former clubs, Internazionale and crosstown rivals A.C. Milan, is officially called Stadio Giuseppe Meazza in the player’s honour.In 2011, he was posthumously inducted into the Italian Football Hall of Fame.

As a child he was a AC Milan fan,but was initially rejected by his beloved club because he was said to be very thin and weak. He then opted to join Inter in 1927 and proved his credibility as a striker by scoring 247 goals in 348 appearances. After 13 successful years with Inter, Meazza moved to his childhood dream club, Milan in 1940,where he spent two seasons.

He later joined Inter once again in 1946 for a season.Overall he won 3 Serie A titles and 1 Coppa Italia with Inter Milan during his first spell with Inter.He also won 2 World Cups with the Italian national team.