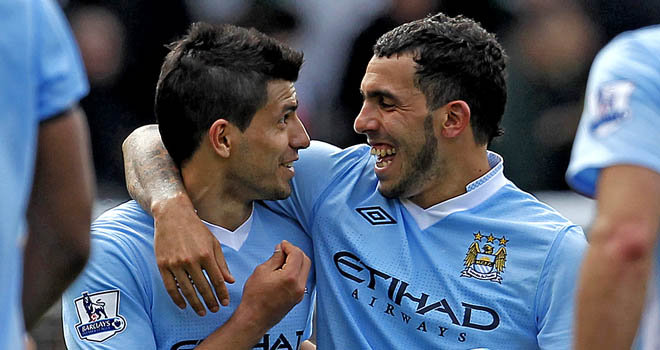 Manchester City have had some great strikers over the years, even when they were not as big a club as they are now. All of them have a special place in the history of the club. In this article, let us have a look at some of the greatest Manchester City strikers of all time.

Considering players who played as forwards for the club, here are the twelve greatest Manchester City strikers of all time.

Dzeko will go down in club folklore as one of the most decisive strikers to have ever pulled on the sky blue shirt as he helped to end long 35 and 44 year waits for silverware and for the league title. His injury-time equaliser against QPR on the final day of the 2011-2012 season will live long in the memory of Man City fans. Overall, he scored 72 goals for the club in 189 matches.

Uwe Rosler signed for Manchester City for £500,000 in 1994 from German club FC Nurnberg. He spent the next four years playing for the Citizens. Although he played for City during a lean period in terms of success, his efforts are worthy of applause. He helped City avoid relegation in his first season and he went go on to form a great striking partnership with teammate Paul Walsh. He was the leading scorer for the club for three consecutive seasons. Overall, he scored 64 times in 176 games for the club.

Hayes was an excellent poacher and scored one of the goals in the 1956 FA Cup final victory over Birmingham City. At 5 feet 8 inches high, he wasn’t the tallest of forwards and he also had poor eyesight, too, but Joe Hayes made the very best of his ability. Hayes was badly injured against Bury in 1963 and played just two more games for City in the next 18 months before moving on. He scored 152 goals for the club and would have scored a lot more if it wasn’t for his injury. 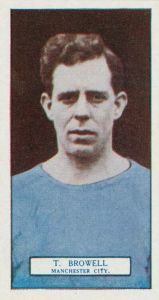 Signed from Everton in 1913, Tommy Browell was one of the greatest Manchester City strikers of all time. Two seasons into his time in Manchester, the outbreak of World War I suspended football for a four-year period. When matches resumed in 1919, Browell formed a prolific goalscoring partnership with Horace Barnes. In the 1920–21 season, Manchester City finished runners-up in the league, and Browell set a career-best of 31 league goals.

He was later sold to Blackpool after City’s relegation in 1926. He is the seventh leading scorer in the club’s history with 139 goals in 247 apps. Tommy Browell would have even more if wartime games were taken into consideration.

Horace Barnes possessed a fearsome shot, and according to legend he once hit a free kick with so much force that it broke the goalkeeper’s wrist. In 1914, Manchester City purchased Barnes for £2,500.00 from Derby County. He had already established himself at Derby and a lot was expected of him, and he didn’t disappoint.

Barnes had a phenomenal goalscoring record for City, netting 125 goals in 235 appearances and was also the first City player to score at Maine Road. After spending ten years with the club, he was sold to Preston North End in 1924.