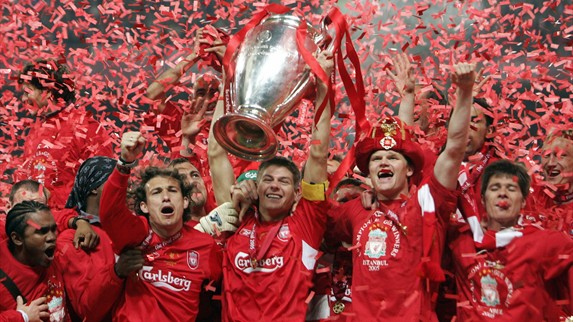 It’s always sweet to see your team winning matches.But it becomes all the more sweeter when your team makes a comeback and win the win game that looked to be over for them few minutes before.Here we have made a list of top 10 greatest comebacks in football history. 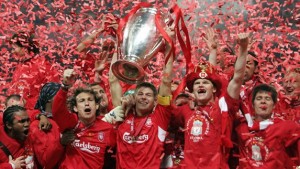 Germany threw away a four-goal lead as a late Sweden comeback saw them surrender all three points in a breathtaking 4-4 World Cup qualifier at the Olympiastadion.

The hosts were 4-0 up at one stage,with goals from Klose,Mertesacker and Ozil.The Swedes responded impressively in the second-half and staged a magnificent comeback, with Erik Hamren’s half-time substitutions having a great effect as they had a hand in all the goals. Strikes from Zlatan Ibrahimovic, Mikael Lustig and Johan Elmander set up a tense finish and the visitors completed an astounding recovery in stoppage time through Rasmus Elm.

Theo Walcott scored a scintillating hat-trick as Arsenal produced one of the great comebacks to win the game 5-7 after being down 0-4 at one time.

It was an extraordinary cup tie, the archetypal game of two halves. Reading were magnificent for 44 and a half minutes before Walcott scored his first goal to give the Gunners hope.Arsenal stormed back from 4-0 down after 37 minutes to beat Reading 7-5 in extra-time to reach the quarter-finals of the Capital One Cup for the 10th successive season.

It is probably the second most memorable match in the history of Man City.It was the 2nd Division Championship Play-Off final.On May 30, 1999, the Blues took on Gillingham at Wembley. Goals from Carl Asaba and Bob Taylor on 81 and 87 minutes looked to have given Tony Pulis’  Gillingham victory.

Kevin Horlock pulled one back in the 90th minute – and deep into injury time, Paul Dickov pushed the game to a draw,with a stoppagetime equaliser.

Newcastle produced a stunning comeback from 4-0 down to earn a draw that shocked title hopefuls Arsenal.

A disastrous first half seemingly left the Magpies staring down the barrel of defeat as a Robin Van Persie brace and goals from Theo Walcott and Johan Djourou put the visitors completely in control.

But Arsenal had Abou Diaby sent off early in the second half,and that sparked Newcastle into Life.Two Barton penalties – sandwiched either side of a  Leon Best finish – gave the hosts belief, and then Cheick Tiote thundered home a 30-yard volley with time running out to send around 50,000 fans into raptures.

Ten-man Manchester City pulled off an amazing comeback in the 4th round of FA Cup tie.

Tottenham led 3-0 at half-time after Ledley King curled the opener, Robbie Keane slid in Stephen Carr’s pass and Christian Ziege fired in a free-kick.T he first half couldn’t have become any worse for City as Joey Barton was sent off for a second booking.

The balance shifted in City’s favour on the restart.Defying their numerical disadvantage, the visitors showed signs of life.Sylvain Distin got a goal back and Paul Bosvelt gave them hope with a deflected shot.Shaun Wright-Phillips levelled before Jonathan Macken headed a late winner,that fixed a tie with Man Utd in the fifth round.

Manchester United produced one of their greatest comeback to beat Spurs 3-5.

Spurs had been 3-0 up at half time after outplaying their opponents.

Dean Richards made a dream start to his Tottenham career by scoring the early opener on his debut and Les Ferdinand and Christian Ziege added further goals.Going into the break Spurs led 3-0

Two injury time goals from substitutes Teddy Sheringham and Ole Gunnar Solskjaer secured the European Cup for Manchester United in dramatic fashion after Bayern Munich had taken an early lead.Manchester United FC redefined what never-say-die means under Sir Alex Ferguson. So many times the Red Devils were pronounced dead only for an all too predictable resurrection. But at the Camp Nou in May 1999 they were in the coffin being lowered into the ground when two substitutes conjured up the comeback of comebacks.

Liverpool beat AC Milan 3-2 in a penalty shoot-out to win the Champions League after sensationally coming from three goals down at half-time.

Steven Gerrard gave Liverpool hope and Vladimir Smicer and Xabi Alonso levelled in a seven-minute spell.It capped an amazing turnaround, with Liverpool looking out of contention after they were completely outclassed in the first-half.

Jerzy Dudek then saved from Andrea Pirlo and Andriy Shevchenko in the shoot-out to clinch a stunning victory.

The German team of amateurs beat the mighty Magyars in the final is an astonishing achievement particularly with the fact that it was a World Cup final and the Germans were once trailing 0-2.

Ferenc Puskas put Hungary in the lead in the sixth minute and teammate Zoltan Czibor made it two moments later. West Germany didn’t roll over and got back into the game through Max Morlock. By halftime it was all square thanks to Helmut Rahn as the rain poured down in Switzerland.And with 6 minutes to go Helmut Rahn scored to win the game for the Germans.

Manchester City scored twice in stoppage time to be crowned champions for the first time in 44 years as they beat Queen’s Park Rangers to win the Premier League on goal difference from Manchester United.

Going into the stoppage time Man City were trailing 1-2 in a game which they needed to win in order to win the Epl beating rivals Man Utd.It was a decent first half for  City as they led going into the break 1-0,courtesy of a Zabaleta’s goal.

Djibril Cisse levelled for QPR soon after the restart before the visitors lost Joey Barton when he was shown a red card against his former club following a clash with Carlos Tevez.QPR shrugged off their numerical disadvantage to reduce the Etihad to stunned silence when Jamie Mackie gave them the lead with a far-post header in the 66th minute.

Then, as the clock started to tick into those added minutes and United were in sight of a 20th title, City and their supporters were transported from the depths of despondency to the highest high in the space of two minutes.Mean while,Man Utd who had beaten Sunderlandhad already started celebrations.It was a 92nd minute corner from Silva which Dzeko headed home to give the hosts a lifeline.In the last minute of added time Balotelli find Aguero in the penalty box who slotted past Paddy Kenny To send the Home fans into raptures.