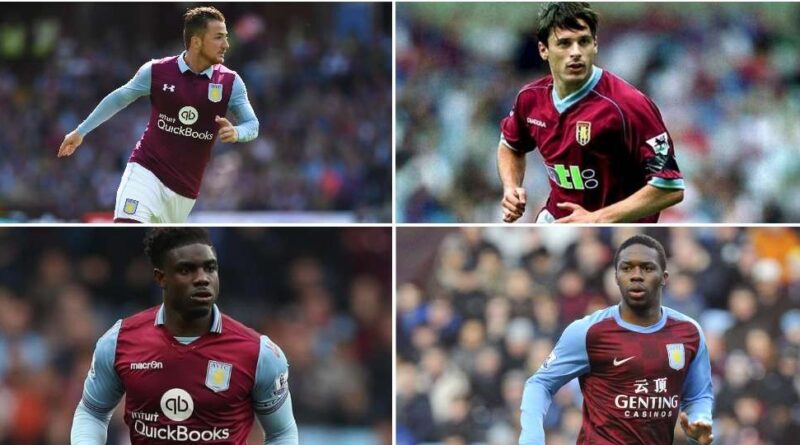 Micah Richards joined Villa in 2015, in what turned out to be a huge financial mistake by the club. Less than a year later and the Midlands outfit was heading to the second tier of English football for the first time in nearly three decades. His constant injuries didn’t help the situation either.

Richards will go down as one of the worst Aston VIlla signings this millennium because after all, he is the only Villa captain to have suffered relegation this century. The manner of the club’s relegation will not sit well with the Holte End faithful, with the likes of Richards, Joleon Lescott and Gabby Agbonlahor getting a lot of stick for the manner in which they ‘performed’ during that campaign.

Having been practically driven to Villa Park by Alex Ferguson for £1.5 million, he immediately looked like he’d never seen a football. So bad was Eric, that the jokes about him were not jokes, they were accurate recollections of just how poor a footballer he was.

The world had already been warned that he was useless during his disappointing time at Manchester United. Why on earth did Villa bother wasting £1.5m on his services?

A tricky, exciting and terrifying player for Bolton, Villa fought off the competition to get him to Villa Park. £4 million? Bargain. What panned out was an unmitigated disaster.

A handful of appearances from a player who promised everything but who was a shadow of the player who lit up the Premier League. A wasted talent who never refound his form or appetite to succeed in the game.

Curcic fell out with Brian Little and John Gregory, moved to Crystal Palace for £1million, won the Serbian version of Big Brother and gave the following quote: “There is a world of difference between football and sex – no question about that. I can’t achieve an orgasm by looking at a team-mate, but it would be a totally different matter with Cindy Crawford.”

The centre-back moved from local rivals West Brom for a small fee but was sure to be picking up a hefty wage. In his only year at the club, Villa were relegated and the ex-Wolves man delivered many poor performances along the way.

‘But now it’s confirmed, maybe it’s a weight off the shoulders and we can give these fans what they deserve, some performances’. That’s an actual quote from Lescott on the day where Villa went down. Imagine being relieved after relegation.

He also summed up his poor attitude by his tweet of a £125,000 sports car, that went out after the side had just been hammered by Liverpool. The fact that he got booed off the park at home ground pretty much sums it up.

Ross McCormack has to go down as one of the worst Aston Villa signings ever. Signed £12m in 2016, he was the player who was meant to help Villa finally break out of the Championship and into the Premier League. A Scotland international, McCormack, made 24 appearances for Villa and those three strikes were his only goals for the club.

He was sent on loan to Nottingham Forest, Melbourne City, Central Coast Mariners, and Motherwell in Scotland, before being released from the club in 2019. Because no other outfit were seemingly willing to take him on a permanent basis.

A certainty for the number one spot, Balaban regularly features on lists discussing the worst ever Premier League footballer. The fact that the striker cost £5.8million, and yet never scored for the club makes the case complete.

Zero goals, nine appearances, seven as a substitute and was released on a free two years later. There were no tears shed when he finally departed. Ridiculously, Balaban scored 23 times in 55 games for his country!