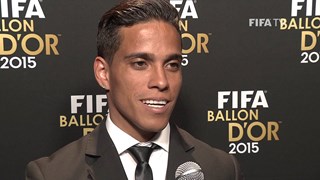 Wendell Lira won the 2015 FIFA Puskas Award for his spinning bicycle kick while playing for Goianesia in the Brazilian Goias state championship.

The Brazilian Wonderkid was honoured at the Ballon d’Or ceremony in Zurich, where Messi later took the top honour as World Player of the year

“I was delighted that Wendell Lira won the Puskas Award for goal of the year,” said the Brazil icon Pele after the Ballon d’Or ceremony.

He was not alone in seeing off competition from some of football’s biggest stars  Lionel Messi, Carlos Tevez, Carli Lloyd

Lira received 46.7 percent of the vote, well ahead of Messi’s 33.3 percent  and 7.1 percent for Alessandro Florenzi of Roma for his goal against Barcelona in the Champions League. Messi has never won the Puskas Award. 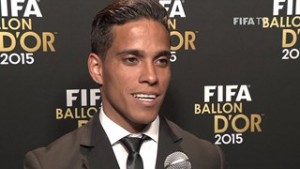 The Vila Nova striker struck a blow for the underdog, capturing hearts and minds around the globe.

Indeed, only Wendell stood between Messi and a clean sweep of awards on the night, succeeding where Cristiano Ronaldo and Neymar failed. Not bad for a guy who, until a couple of years ago, worked part-time in his mum’s cafe to help pay the bill

Wendell Lira was a promising talent from a young age and made his senior debut in 2006, aged just 16. Over the next couple of seasons, his eye for a goal caught the eye of national youth coaches, who drafted him into the Brazil Under-20 set-up alongside future stars like Alexandre Pato.

AC Milan made an approach to Goias, offering R$6million for the brazilian striker. The club turned down the offer the following year, the Rossoneri moved for Pato instead. “I understood their decision,” Wendell said. “I was happy just to be playing and they thought they could sell me for more money later.”

But two serious injuries suffered in 2008 and 2010 hampered his progress ,and he would be released by Goias in 2012 after struggling to rediscover his touch. He considered calling it a day, chipping in as a waiter at the family business to make ends meet.

When he did resume his career, it was as an itinerant wanderer: between 2013 and 2015 he played for no fewer than six clubs, often for a pittance. It was a frustrating time for Wendell, but the support of his wife, Ludymila brought solace. “She was always by my side, telling me to keep going,” he said. “She’s the main reason I didn’t give up.” The birth of his daughter, Marcela, provided added incentive.

His preparations for the trip to Zurich were pored over: “I’m taking three shirts and two pairs of trousers,” he told a reporter from Globo. “I’m taking the suit in my hand luggage. It was made specially by a local shop. I’m leaving space in my suitcase for the trophy.”

Upon receiving the award, he could not hold back the tears. “I’m so thankful to be here, meeting idols who I had only seen in videogames,” he said

He was not the only one overcome with emotion. Back home in Goiania, his mother, Maria Edileuza, was in floods of tears after watching the announcement on TV. Friends and family had all crowded around her screen to watch the historic moment.

“I was scared that they had made a mistake,” she told Globo. “It doesn’t seem real. It’s a marvelous thing. I’m so proud of him. We’re going to meet him at the airport and hug him. I miss him so much!”

After the shock and awe of the ceremony, Wendell  who had never even been on a plane before travelling to Switzerland – played down his achievement. “It was a nice goal, but I think there were better ones” he said. “I’d give it eight out of ten.”