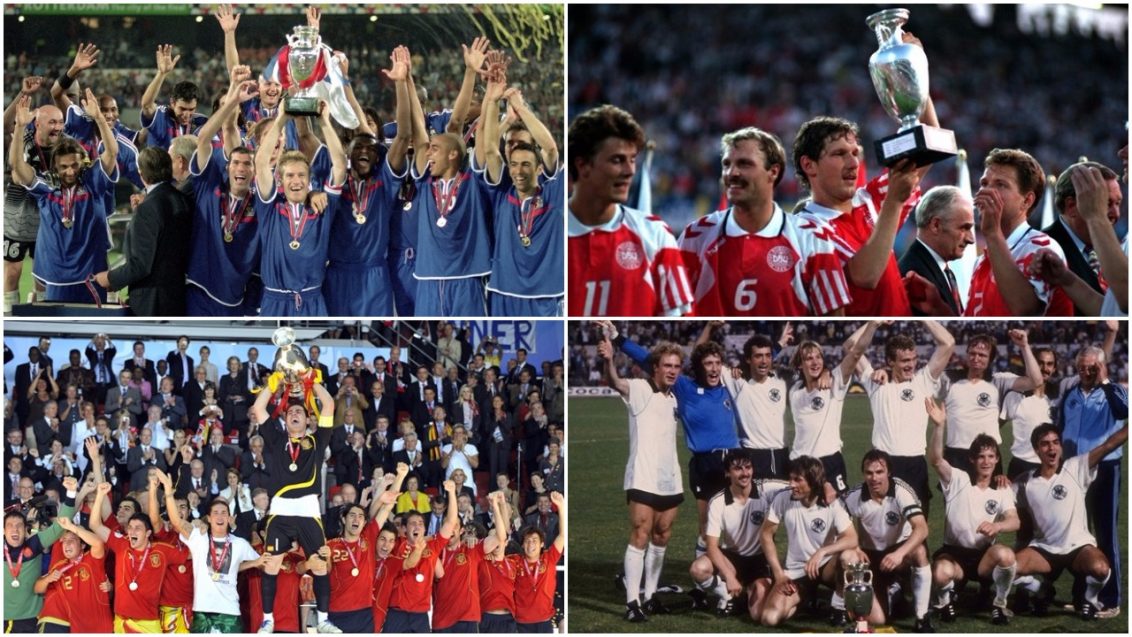 The first European Championship was played in 1960 in France.

The first final of the UEFA European Football Championship (then referred to as the European Nations’ Cup Final) was contested in July 1960 in Paris between the Soviet Union and Yugoslavia. Milan Galić scored for Yugoslavia just before half-time but Slava Metreveli equalised soon after the break, and the scores remained level, sending the game into extra time. With seven minutes left, Viktor Ponedelnik won the match for the Soviet Union, scoring the winner with a header.

Soviet Union faced hosts Spain in the final of 1964 European Championship, Jesús María Pereda scored early for the home side, but the match was levelled two minutes later when Galimzyan Khusainov equalised.Marcelino won Spain the title with a goal six minutes to the final whistle.

The host nations,Italy qualified for the final and faced Yugoslavia in the final. Italy’s semi-final opponents, the Soviet Union, had been eliminated from the tournament after losing a coin toss used to determine ‘the winner’ of the goalless draw. Italy won their first title after the final went for a rematch and ended 2-0 in their favor, two days after they tied 1-1.

The Soviet Union, finalists for the third time in four tournaments, were defeated 3–0 by West Germany with Gerd Müller and Herbert Wimmer scoring the winning goals.

The defending champions qualified for the final of the 1976 tournament, where they faced Czechoslovakia. A late equaliser from German Bernd Hölzenbein to make it 2–2 saw the game go into extra time and eventually to a penalty shoot-out.Czechoslovakia won the shoot-out 5-3 after capitalizing on a miss by the German Uli Hoeneb.

West Germany was at the finals for a third consecutive time, this time facing Belgium. Two goals from Horst Hrubesch made it 2-1 for Germany and they were crowned the European Champions for the second time.

The 1984 final, in Paris, featured hosts France against 1964 champions Spain. Two second-half goals, one each from Michel Platini and Bruno Bellone, secured a home victory. Platini ended the tournament with nine goals, the most scored in the championship finals by any player to date(Cristiano Ronaldo also has 9 goals).

The Netherlands qualified for their first final in the 1988 tournament in West Germany, where they faced the Soviet Union who were playing in their fourth final. Ruud Gullit scored in the first half and Marco van Basten doubled the lead in the second for the Netherlands with a Spectacular volley. With a 2–0 victory, the Netherlands secured their first “major” title

Following Yugoslavia’s expulsion from the competition in 1992, Denmark were invited to take their place and qualified for the final where they faced a team from the newly reunified Germany. Goals from John Jensen and Kim Vilfort secured a 2–0 victory for the Danes in their first and only European final.

Germany won their first ever international trophy as a unified nation in 1996 after beating the Czech Republic in extra-time with an Oliver Bierhoff golden goal.Germany fell behind after 53 minutes thanks to a Patrick Berger penalty, but it was the substitute Bierhoff that came to the rescue. Bierhoff scored the equalizer after 73 minutes, and Germany would take the match into extra-time. The format that year was that of sudden death, meaning once the first goal was scored it was game over. Once again it was Beirhoff who delivered for Germany as he took a shot that was deflected and snuck by the Czech goalkeeper. It was Germany’s third European Championship, and last international championship until the 2014 World Cup.

France won their second European Championship back in 2000 with one of the most dramatic finals ever played. France had to take on Italy,a team that boosted a strong defensive line-up, as they always do with names like Cannavaro and Maldini. When Italy took the lead ten minutes into the second half, it seemed like a 1-0 win was in the cards for the Italians. But France wasn’t shy of attacking talent, and they managed to equalize right at the very end of normal time. 3 minutes deep into stoppage time, Sylvain Wiltord broke Italian hearts by leveling the score. The final that summer was destined to go to extra-time. Like in 1996, the match would be decided with a golden goal in extra time. David Trezeguet would be the hero this time as he fired in an unstoppable shot behind Francesco Toldo. The goal gave France their second European Championship, and two years prior they had won the World Cup.

Greece made it to the final of the tournament for the first time having played in two European Championships. Though they had earlier on lost to Greece in the group stage, Portugal remained the favorites to win the match. Greece presented a major surprise by defeating the host nation by 1-0 in the 2004 final, thanks to a goal by Angelos Charisteas.

Germany qualified for their sixth final in 2008, and faced Spain in a tournament co-hosted by Austria and Switzerland. A first-half strike from Fernando Torres was the only goal of the game, and helped Spain win their first European trophy for 44 years.

This match  about watching a brilliant Spanish side make history in the most effortless way possible. Spain had won Euro 2008, and the World Cup in 2010. In 2012 they came into the final with a chance to win 3 major tournaments on the trot. They didn’t disappoint and stormed passed a talented Italy side. Two goals in the first half and two in the second half left no hope for the Italians and left us amazed by a true dynasty. Spain has since lost some of their shine, but from 2008 until 2012, there was no one better.

Potugal beat France in the 2nd half of the extra time courtesy of a Éderzito António Macedo Lopes(Éder) goal.He came on as a substitue in the extra time and won the game 1-0 for his country.