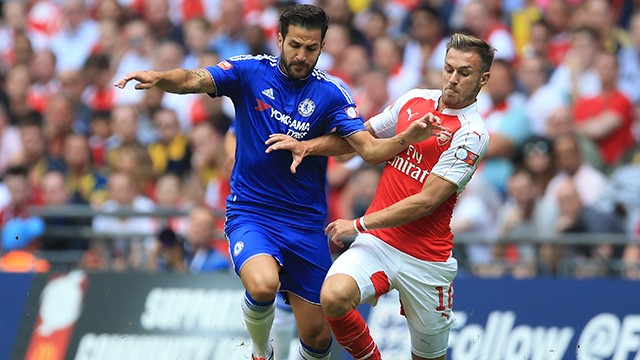 With the recent form of Chelsea, many pundits and fans expected an Arsenal win but again it wasn’t to be as Chelsea completed the league double over Arsenal, which leaves them unbeaten for 9 league games against their london rivals now, in which Arsenal have scored a grand tally of 2 goals. The game was another reminder of how easy it is to get under Arsenal’s skin, infuriate them, and eventually snatch 2 or 3 points off of them. 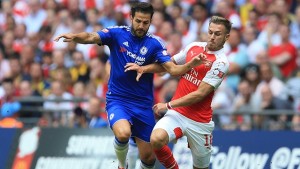 The game started with breathtaking tempo from both sides, justifying all the derby hype and it would seem like (as the scorelines suggests) a very hard fought game. But that wasn’t to be, as Per Mertesacker was shown his way to the dugout for a stupid last man challenge on Diego Costa, who made quite a meal out of the challenge. As if losing their Centre-back to a stupid tackle wasn’t bad enough, Arsenal fans were treated to surprise substitution of Giroud with Gabriel, a decision which was booed by the Arsenal faithful. Wenger later defended his acts at the press conference quite sarcastically, “Do you want me to make a poll for every decision?” he told reporters.

In reality, it was a decision that would’ve gone either way. With Giroud gone, Chelsea had one less in-form forward to worry about, but with Chelsea attacking furiously in some passages of play, the lack of a solid CB would have led to Arsenal suffering defeat by a huger margin. None of this prevented the in form Diego Costa giving more reasons for arsenal fans to hate him, as he scored from a brilliant cross put in by Branislav Ivanovic, who had contributed a lot throughout the game, playing unlike himself in the first half of the season.

Both the teams wouldn’t stop there, as counter-attacks from Arsenal lit up the evening at the Emirates, dimmed down by an excellent display from Chelsea’s defence. While John Terry continues to show that he still has it in him to go the full 90 minutes in big games and provide his service, Zouma and Mikel continued their runs of form, minimalising the impact of Alexis Sanchez and most importantly keeping Arsenal’s talisman Ozil silent for the whole game.

Arsenal came close many a time to equalize, but it was Chelsea who created more clear-cut chances towards the end of the game, the most notable of which were scuffed by Loic Remy and Willian. Chelsea saw through the end of the game with utmost ease, something they haven’t been able to do in recent times.

With the match ending 1-0, it left many fans, pundits and probably Arsene Wenger scratching their heads over how Arsenal were dominated by a spirited Chelsea team, who are enduring their worst season in recent times. Most of the blame was pushed towards Diego Costa, who got under the skin of the opposition like always, made a meal out of a challenge from Mertesacker, which led to his sending off and start a string of unfortunate events, but in truth Costa was doing what any striker would have done, as said by Wenger himself

Asked whether Costa had made the most of the situation, Wenger said: “Yes. That is the game of the striker. Diego Costa is good at that.”

This match yet again highlights of Chelsea somehow have a psychological hold over Arsenal whenever they meet each other. It is this very negative psych from Arsenal’s players which has led to them getting 4 red cards in the last 5 games against Chelsea, in which they’ve scored none and conceded 11. It boils down to the fact Arsenal need to keep their emotions in check, a derby generates emotion and adrenaline; Yes. But it is the manager’s job to keep this in check and ensure the team plays with a positive attitude rather than get swayed by emotion. This collective failure from players and coach alike have led to them losing an important derby yet again, leaving Chelsea unbeaten in the Guus Hiddink regime, in which they’ve been unbeaten for 7 games now, making them the holders of the current highest unbeaten streak. Have Chelsea come back to their old selves? Time will tell in this crazy league.