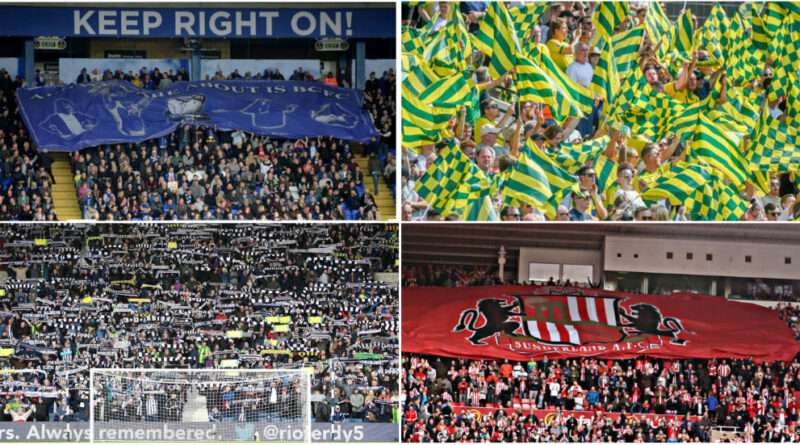 England is home to some of the most passionate football fans in the world. Even in the second division of this country, many stadiums produce a top-notch experience and vibrant atmosphere. In this article, we are ranking the EFL Championship stadiums on the atmosphere.

Based on thousands of fan votes collected on footballgroundmap.com, and the92.net, here are the EFL Championship stadiums ranked on the atmosphere.

Opened in 1999, DW Stadium has a capacity of 25,138. The four stands are roughly the same height and are all single-tiered, and each stand’s capacity ranges from 5000-8500. There is a lot of room for improvement when it comes to the atmosphere.

CBS Arena is a multiple-purpose football stadium, that opened in 2005. It has a capacity of over 32,500 but has often been criticised for its lack of atmosphere.

Bloomfield Road has been the home of Blackpool since 1901. The stadium is single-tiered with a capacity of just over 16,000. The atmosphere here can be a hit and a miss.

Madejski Stadium was opened in 1998 and has been the home of Reading FC ever since. It has a capacity of 24,161 and is often rated as one of the worst atmospheres in the Championship.

Ewood Park has been the home of Blackburn Rovers since 1890. It is an all-seater multi-sports facility with a capacity of 31,367, with four stands named Bryan Douglas Darwen End, Riverside Stand, Ronnie Clayton Blackburn End, and Jack Walker Stand. The atmosphere here is not the worst but could be better.

The MKM or Hull City stadium is a multi-purpose facility and has been the home of The Tigers since 2003. The Stadium is totally enclosed, with the Cranswick plc West Stand being two-tiered can accommodate twice the amount of people compared to the other three single-tiered stands. It has a good friendly atmosphere, welcoming the away supporters.

Deepdale has been the home of Preston North End since its opening in 1878. It is one of the oldest active football stadiums in England. It is an all-seater stadium with a total capacity of 23,404. Deepdale offers a good atmosphere.

Cardiff City Stadium replaced Ninian Park as Cardiff City’s home ground in 2009, and has a capacity of 33,280 supporters. It is the second largest stadium in Wales after Millennium Stadium. The stadium offers a vibrant atmosphere on certain matchdays.