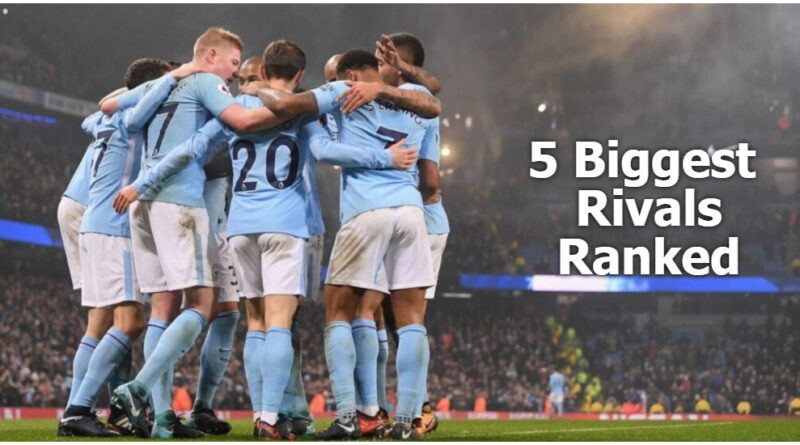 Everyone loves thrilling matches. And good rivalries produce great matches. It’s exactly what pulls in the mass, the people and the media. These games create indelible moments in a fan’s life while a lifelong misery in the other. Over the years, the top tier of English football has witnessed some of the fiercest rivalries in world football.

Manchester City’s domestic success of late has seen the team make rivals along the way. In this article, let us have a look at some of the biggest rivals of Manchester City.

Based on various factors like intensity, media hype, atmosphere and quality of the matches, here are the five biggest rivals of Manchester City.

Arsenal vs Manchester City today in a game has calmed down since threatening to become the next big rivalry in the Premier League around a decade ago. However, it is surely a mouth-watering encounter to watch.

Whilst most big rivalries are attributed purely to geography, others are born out of circumstance. One of the most heated ties between the two teams took place in 2009. Emmanuel Adebayor scored and ran the full pitch to celebrate his goal and rile up the travelling Arsenal fans. The forward had recently switched clubs which caused quite a bit of outrage against the Togo international.

Between 2009 and 2014, City signed a few Arsenal players, including the likes of Nasri, Clichy, Adebayor, Kolo Toure etc, which probably angered the Arsenal fans. All this resulted in a rivalry that has resulted in some good matches.

Manchester City and Chelsea have been the two most successful teams in England in the last decade. The rivalry has merely stemmed out of the fact that both teams go head-to-head for silverware.

In 2020-21, Chelsea beat Manchester City in the final of the Champions League, resulting in a new chapter in the rivalry between these two.

Chelsea won the league under Antonio Conte during Pep’s first season at Manchester. However, City won four of the next five league titles, showing their intent. Chelsea is one of the biggest rivals of Manchester City.

Before the turn of the century, the meetings of Tottenham Hotspur and Manchester City were not considered as a rivalry. However, after the takeover in 2009, City started to focus to play regular European football. The two clubs battled for fourth place and a Champions League spot in 2009/10, there has been an undoubted escalation of ‘hostilities’.

When the two sides met in May 2010, with Champions League football for the following season on the line, the game was suitably tense. Spurs of course came out on top, Peter Crouch heading in the late winner. Thus, started a low-scale rivalry which has increased over the years, especially with Manchester City dominating English football.

The two faced off in the Champions League quarter-finals in 2019 where VAR stopped Pep’s party as Sterling’s late strike was disallowed in the second leg which allowed Spurs to win 4-4 on away goals.

The Manchester-Liverpool rivalry is one traditionally associated with United rather than City, but the blue half of Manchester is now getting in on the act.

The two sides have been English football’s dominant forces in recent seasons, and there have been some memorable battles for the title and classic matches that will be remembered forever along the way. In fact, since 2016 Liverpool and Manchester City have won five of the six Premier League titles.

The 2018/19 title race definitely intensified the rivalry. Manchester City had to win all their last 14 games to clinch the title on the final matchday by one point.

Even during the 2021-22 season, the title was decided in the final few minutes, with City coming back from two goals down to win the match against Aston Villa, and thus winning the league at Liverpool’s expense.

Taunted as the ‘Noisy Neighbors’ by Sir Alex Ferguson, it’s pretty self-explanatory why both sides of Manchester absolutely disgust each other. The bragging rights are at stake as the Manchester Derby. It is that one match that both sets of fans hope they don’t lose.

The rivalry between both clubs started well before the clubs took their modern shape or form. The first friendly fixture was played between Newton Heath and West Gorton clubs on 12th November 1881, with both the teams later changing their names to Manchester United and City respectively.

The origins of the rivalry can be traced back to the 70s when controversial on-field incidents led to a spate of injuries and fans became slowly polarised in support of their teams.

The behaviour of United fans in the 73/74 Manchester Derby when they invaded the pitch to halt the match and prevent their team from getting relegated riled up emotions on both sides. It slowly catalysed the divisions in Manchester, which came to a head with the introduction of the Premier League.

Checkout: 10 Players Who Played For Both Man City and Man Utd