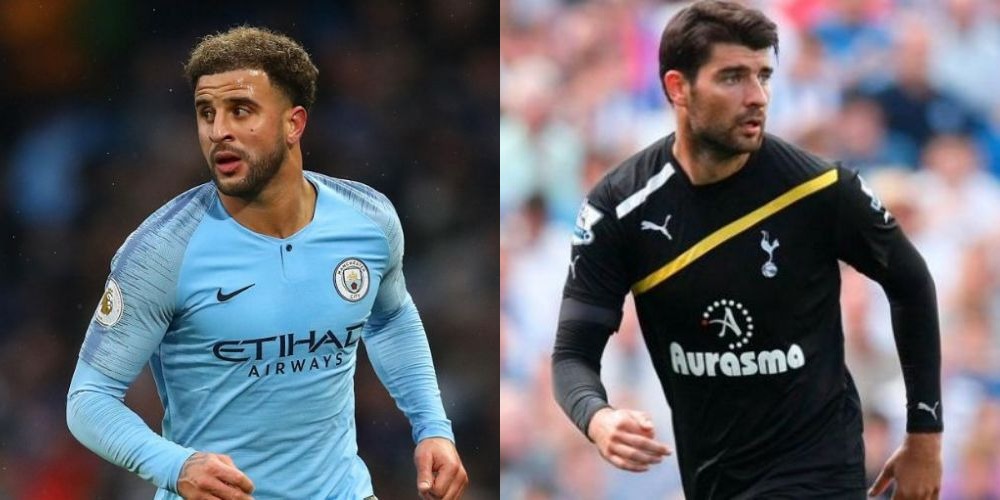 The Togolese striker made controversial headlines for both his on-field and off-field actions at Manchester City and Spurs. One such moment was him celebrating a goal against ex-club Arsenal by running the length of the field and sliding on his knees in front of the visiting Gunners fans.

Adebayor had left Arsenal to join City in 2009. He played only two seasons for City, scoring 15 Premier League goals in 34 Premier League appearances for City before going out on loan to Real Madrid and then to Spurs.

His debut campaign in 2011/12 was a success, the centre-forward finding the net 17 times as Spurs finished fourth under Harry Redknapp. He only managed five goals the following season, though, and despite a resurgence during Tim Sherwood’s time in charge, Adebayor was sidelined and eventually discarded by Mauricio Pochettino.

Kyle Walker began his carrer with Sheffield United. He moved south to Tottenham in summer 2009 – only to return to Bramall Lane on a season-long loan a few months later. The Englishman also had temporary spells at QPR and Aston Villa, before eventually establishing himself as Tottenham’s first choice right-back in 2011-12.

Walker remained Spurs’ go-to right-back throughout the next five seasons, helping Mauricio Pochettino’s side into the Champions League and then to a second-place finish in 2016/17. City spent £50m on his signature soon after, bring Walker to the Etihad.