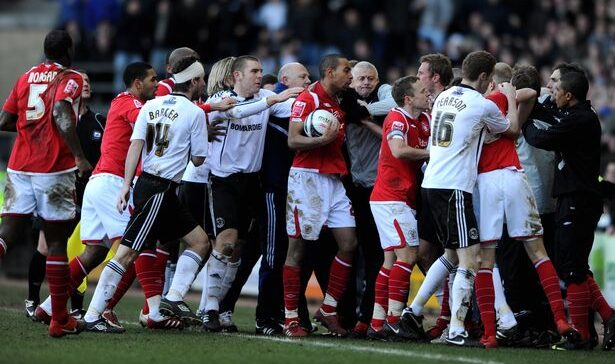 Nottingham Forest are one of the biggest and most followed clubs in England. They have a rich and successful history, laden with trophies. They have won one League title, two FA Cups, four League Cups, one FA Charity Shield, two European Cups, and one UEFA Super Cup, not something that many clubs can boast of. All these successes as well as geographical locations have resulted in some rivalries. In this article, let us have a look at some of the biggest rivals of Nottingham Forest.

Based on fans’ opinions, match intensity, history and the hype surrounding the games, here are the five biggest rivals of Nottingham Forest.

While neither clubs consider the other among their biggest rivals, you cannot deny the tension whenever they play each other. In a 2019 online survey, Forest fans voted Leeds as their fifth most hated club. With Forest’s promotion to the Premier League, this rivalry is all set to be spiced up.

Forest fans consider Wednesday as their fourth-biggest rival. Even though Wednesday fans do not consider Forest as one of their five biggest rivals, the atmosphere and intensity during the games between these clubs are top-notch. This is an enmity that can be traced to a national coal mining dispute in the 1920s and is still rooted in the hostility of the 1984 miners’ strike. It lives on in the memory of older fans and folklore for the rest.

Forest Fans voted Sheffield United as their third biggest rival. Sheffield and Nottingham have an unusual and lesser-known rivalry in British football, but it can’t be downplayed. It is not born of local competition, since 32 miles of the M1 separate the two cities. This rivalry can be attributed to the miners’ strikes of the 1980s, where workers in the pits of Nottinghamshire did not join the strike while miners from Yorkshire did.

One thought on “Nottingham Forest: The Five Biggest Rivals Ranked”