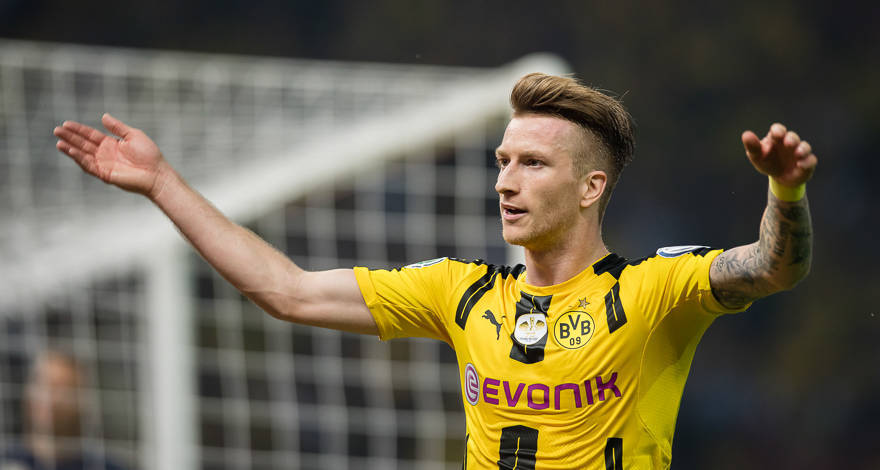 Injuries are one of the uglier aspect of the beautiful game of football.Injuries have ruined many footballers carrer,some of them even had to retire.Today we will look at some of those ‘Most Injury Prone Footballers Ever’.

Marco Reus is one most loved footballers worldwide.The Borussia Dortmund man is a very important player for his team and his perfomances have been been impressing.But he is prone to injuries, Reus missed the 2014 FIFA World Cup through injury and now the Euros this year again through injury so he’s been known for being injury prone for sometime now.If he can stay injury free ,he can become one of the world’s best.But if it continues this way,he will find a permanent place in ‘ Most Injury Prone Footballers Ever ‘.

Premier League Clubs Ranked According To How Old Their Name Is!

West Ham United striker Andy Carroll has suffered significantly with injuries over the past few years; already injured when he moved to Liverpool in 2011, he then suffered knee and hamstring problems and later a significant heel issue.

He then transferred permanently to West Ham, got injured again.Because of his injuriess he could never reach his true potential.

Italian midfielder Alberto Aquilani who currently plays for Sporting CP,has hopped his way around Liverpool and Serie A for some time now, but not because he was never good enough to play.

No, he just couldn’t stay healthy long enough for it to be worth it.

Ever since 2009, Aqualiani has been struck down with various injuries, and they’ve been a big hindrance to the progress of an extremely talented midfielder.

He played just 141 mins in the whole of last season,still somehow managed to be on the plane for Euro 2016.

Despite breaking through in the 2009-10 season, Wilshere has reached the 30-game barrier just once in his career so far.Ankle injuries have been his most frequent issue, but foot fracture is another setback for Wilshere.

He is still young and can become of the best to wear an Arsenal jersey if he can overcome his injury problems.

Most Passionate Fan Bases In Football

Australian attacker Harry Kewell promised so much in his time at Liverpool, Leeds and Galatasaray. And yet you just got the sense that he never truly delivered on that promise.

Harry Kewell’s five-year stint at Anfield was marred by injuries and he was even suspected of feigning the torn adductor muscle he picked up during the 2005 Champions League final.Nonetheless, groin, abdominal and hernia problems all contributed to his unreliability in his time on Merseyside.

He currently plays in the French League with  Olympique de Marseille.During his 9-years spell with Arsenal he suffered 42 injuries,that kept him out of action most of the times.

Premier League may not have seen as injury prone midfielder as Abou Diaby.

Dean Ashton is an English former professional footballer. He made over 240 appearances as a forward in the Football League and Premier League for Crewe Alexandra, Norwich City and West Ham United, and was capped by England.

The striker had only turned 26 when he was forced to retire in 2009. Three years earlier he had suffered a bad ankle injury on England duty and failed to fully recover. He missed the whole of the 2006/07 season and then played 35 times the following campaign. However, he had to call it a day when the ankle gave him trouble in the 2008/09 season.

Ever since hitting his mid-to-late 20s, Kieron Dyer has been struck down by the injury curse time and time again, and it’s forced him to spend some serious time on the bench.

Injured every year since 2007, Dyer has missed over 12 months of action with various injuries, and it no doubt saw him leave West Ham and QPR when he did.

Ledley King truly could have been a great premier defender if it wasn’t for his knees and other constant problems they caused him throughout his time at Tottenham Hotspur.

His dodgy knees means he is limited to what he can do in training and the games he can play in.King spent three serrate periods of six months on the sidelines in the space of three years, and you’d argue that his career never really recovered from that point.

Michael Owen’s footballing career might forever be summed up in the words “what if,” for he never quite delivered on the potential he showed as an up-and-coming star striker.

Since leaving Liverpool,he consistently suffered from injury problems.Muscular problems, knee injuries and several groin strains continued to plague Owen right as he seemed to have made it to the top in world football—bringing about his fall from Real Madrid, Newcastle United, Manchester United and last of all at Stoke City.