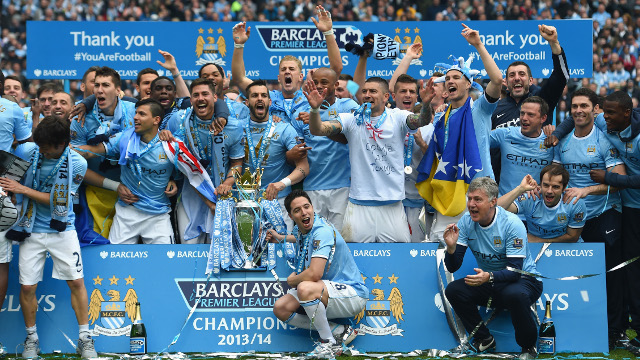 Manchester City have seen many highs during their colorful existence. With four First Division/Premier League titles, five FA Cups, five League Cups and one Cup Winners’ Cup, City stand tall as one of the most successful English football clubs of all time. In this article we will have a detailed look into Manchester City League Winning Seasons. 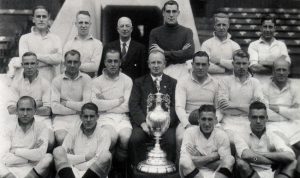 In the 1936/37 season City lifted their maiden First Division title and, to make it even sweeter, Man United were relegated. The team had Frank Swift in goal- known for having an enormous 12 inch hand span and innovating the throw out.

City main goalscorers for the season were Fred Tilson, Peter Doherty and Eric Brook who scored 15, 35 and 22 goals respectively. Peter Doherty, one of the few non-Englishmen in the squad, was the Northern Irish equivalent of current ace Sergio Aguero.

In the third full season under the management of Joe Mercer and Malcolm Allison, many observers had given City little chance of achieving glory going into the 1967-68 campaign; an understandable assessment considering their 15th-placed finish the previous season.

The critics looked to have been on the money from the off as the Blues got off to an unspectacular start with a draw and two defeats. Soon after came arguably City’s defining moment of the season. The club got the cheque book out in early October to lavish the princely sum of £60,000 on Francis Lee, a club record at the time.

The forward arrived from Bolton Wanderers and made an instant impact as City embarked on an 11-game unbeaten run which included a comprehensive 6-0 win against Leicester City. Lee began to find the net for fun along with freescoring teammates Colin Bell and Mike Summerbee as City finally had an answer to the Holy Trinity of Best, Law and Charlton across the road at title rivals United.

A showdown with United at Old Trafford came at the end of March and was won by City 3-1 as Bell and Lee were again amongst the scorers. As the season reached its climax, both Manchester clubs continued to battle it out at the top of the table. Liverpool kept on the tails of both sides, but it looked as if the local rivals would take it to the wire.

A run of three wins towards the end of the campaign meant that City would go into the final day of the season level on points with United, but top by virtue of goal difference. While the Blues hosted Newcastle United at Maine Road, the Red Devils travelled to Sunderland.

Despite a tenacious display from the Magpies, second-half goals from Young and Lee claimed the Championship for City in a 4-2 win as United went down 2-1 to the Black Cats. The league championship was the first trophy of the most successful period in Manchester City’s history. Under Mercer and Allison, the club won a further three trophies in the following two seasons.

Manchester City scored twice in stoppage time to be crowned champions for the first time in 44 years as they beat Queen’s Park Rangers to win the Premier League on goal difference from Manchester United. Sergio Aguero sent the Etihad Stadium into ecstasy after capturing Manchester City’s maiden Premier League title with a last-gasp strike.

Both Man City and rivals Manchester United were neck and neck after winning their first four matches, and that set the tone for the title race. It was Roberto Mancini’s Man City side who grabbed the initiative in the title race, though, dropping just four points in their opening 14 matches and scoring 48 goals in the process.

However, by the time of Christmas, both the teams were level on points. United then went on an eight-match winning streak to open up an eight-point gap at the top, but two defeats, including one courtesy of a Vincent Kompany header, against City, and a 4-4 draw against Everton left their rivals ahead on goal difference going into the final match.

Roberto Mancini’s side needed victory to clinch the prize that has eluded them since 1968 and took the lead through Pablo Zabaleta shortly before the interval.

Djibril Cisse levelled for QPR soon after the restart before the visitors lost Joey Barton when he was shown a red card against his former club following a clash with Carlos Tevez.

QPR shrugged off their numerical disadvantage to reduce the Etihad to stunned silence when Jamie Mackie gave them the lead with a far-post header in the 66th minute.

Then, as the clock started to tick into those added minutes and United were in sight of a 20th title, City and their supporters were transported from the depths of despondency to the highest high in the space of two minutes. Dzeko levelled in the 92nd minute and, with virtually the last kick of the match, Aguero’s cool finish made City champions. Fans streamed on to the pitch as a historic first Premier League triumph was confirmed.

Managed by Pellegrini in his first season, Man City were only top of the table for 15 days during the season, but they made them count. The Citizens overtook Liverpool in Matchweek 37 and finished off a run of five consecutive wins with a 2-0 success against West Ham United at the Etihad Stadium in the final match to seal their second Premier League title.

Liverpool had looked on course to win the title with two weeks to go, but a loss and a draw in two of their last three matches left the team in second place with 84 points. Chelsea finished third and Arsenal, who led the table for the longest period, finished fourth. Manchester United had a disappointing season attempting to defend their title and ended up seventh, a then-joint worst performance for Premier League holders.

Manchester City’s Yaya Toure had a great season and City fans were quite rightly upset when the PFA player of the season went to Suarez instead of him. This season was also remembered for Gerrard’s slip, however none can deny that Manchester City were the deserving winners!