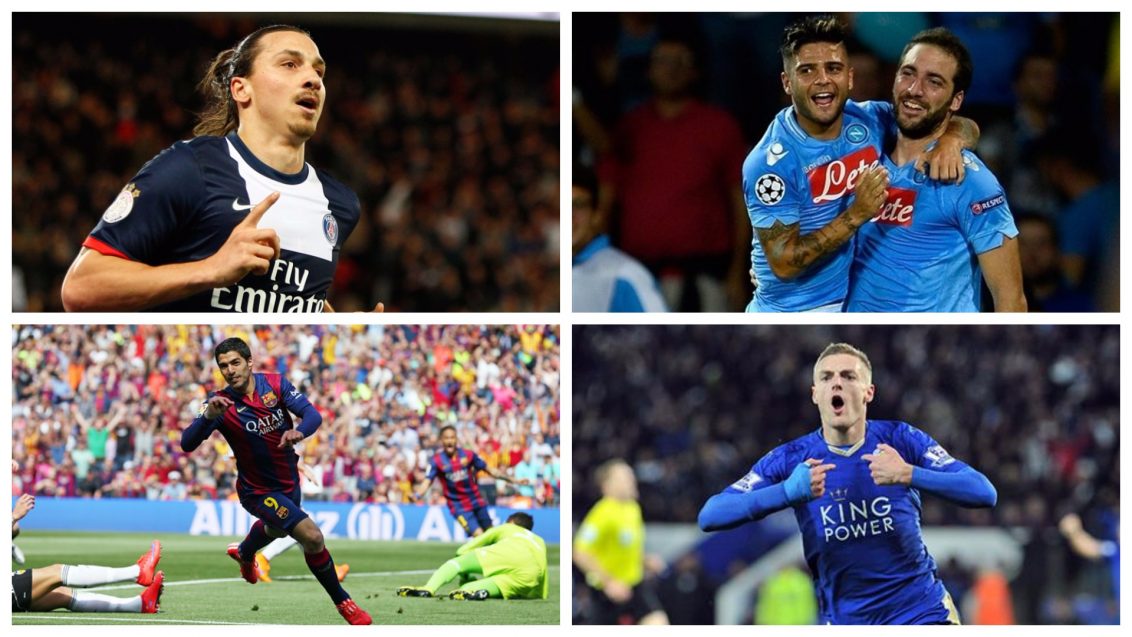 Goals are very important part of a game.Not only they entertain us,they also help us to win matches.Goalscorer are generally the most followed and most loved of all Footballers.Let us have a look at the top goal scorers of the european leagues!

[Note-Only league goals are being counted]

What a season Jamie Vardy and Leicester City are having , Leicester’s unexpected and magical run continues  as Vardy Scores Goal of the Season Contender vs Liverpool, few days ago.

Vardy brace against Liverpool has helped his team to retain their No.1 spot in the Premier League table!

On 21 November, Vardy matched Van Nistelrooy’s record of consecutive Premier League games with a goal, opening a 3–0 win over Newcastle United. A week later, against Manchester United, he scored again to claim the record for himself.

Bayern Munchen’s inform striker Robert Lewandowski has 19 goals this season but he is the sixth best goalscorer .He also set a Bundesliga record for the fastest hat-trick (three goals in four minutes), and most goals scored by a substitute (five) this season.

Lewandowski’s five goals in nine minutes was also the fastest in any major European football league since Opta began keeping records, and it ended Wolfsburg’s 14-match unbeaten run.He was awarded four certificates by Guinness World Records for this feat.

He finished fourth in the 2015 FIFA Ballon d’Or voting.

Its Luis Suárez  with 19 goals as well but he claims the fifth spot.The Barcelona striker has been ruthless in front of goal this season and has scored some spectacular goals already this season.He is considered to be one of the best strikers in Europe.

With 43 goals in 82 games for Uruguay, Suárez is the all-time record goalscorer for his national team.

Cristiano Ronaldo  is the fourth best goalscorer with 19 goals this  season , he gets better and better in front of goal everytime.

Cristiano Ronaldo is all about Hardwork , Speed , Class and Inspiration.

On 17 October 2015, all doubt surrounding the record was cast aside as Ronaldo became Real Madrid’s all-time top goalscorer after he scored the club’s second goal in a 3–0 league win at home over Levante to take his tally to 324 goals.

On 29 November, Cristiano Ronaldo scored once against Eibar to become the joint-third all-time top goalscorer in La Liga alongside Mexican striker Hugo Sánchez.

He scored four goals in an 8–0 win against Malmö FF on 8 December 2015, and became the first player to score double figures in the group stage of the Champions League, setting the record at 11 goals.

African Player of the year winner has been a hit since he joined German outfit Borussia Dortmund.This Season is turning out to be the best season for Aubameyang, he is the second best goalscorer with 20 goals

On 30 January 2016, Aubameyang scored his 19th and 20th goals of the season to give Dortmund a 2–0 home victory over FC Ingolstadt.At the halfway stage of the Bundesliga season, Aubameyang was the league’s top scorer in Europe with 18 goals from 17 appearances.

Higuain is the leading goal scorer with 23 goals so far this season,his finishing has been cleanical this season.

He is proving out to be a great signing for Napoli .Higuain is a French-born Argentine.He joined Italian side Napoli for €40 million in the summer of 2013, where he won the Coppa Italia during his first season.

Higuain is the reason why Napoli are at the top of the table in their league.