SSC Napoli is one of the most followed clubs in Italy. The club is well-known for its passionate fans. It has won Serie A twice, and been runners-up six times, the Coppa Italia five times, the Supercoppa Italiana twice, and the 1988–89 UEFA Cup. Napoli have had ups and downs throughout their history and many great players donned the Gli Azzurri jersey in their highs and lows. In this article, let us have a look at some of the greatest Napoli players ever.

Here are the top 10 greatest Napoli players ever – 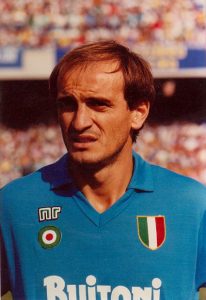 Napoli brought Ferrario in the summer of 1977. The Italian spent 11 years with Partenopei, where he played mostly as a sweeper. He is the club’s fourth highest appearance holder of all time with 396 matches. He won a Scudetto and a Coppa Italia with the club in 1987. After losing the 87-88 championship by a few points, Moreno was sold to Roma. 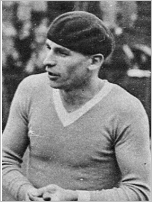 Vojak’s football career started with Lazio during the 1924–25 season. His stay at Lazio was cut short as Juventus, being impressed by the youngster, signed him within that year.

In 1929 he left Juventus for Napoli, where he became an early legend at the club. He stayed with the club until 1935, scoring over 100 goals for them in 196 appearances. Vojak also appeared for the Italian national football team once in 1932.

Careca was one of the greatest strikers in the history of Brazilian football. He was a prolific, fast, opportunistic, and powerful striker, with excellent technique and great striking ability. Despite being right-footed, he was also capable of scoring with his left foot, and he was known for his ability to score goals off-balance from angled shots even when running with the ball.

The Brazilian striker was signed from Sao Paulo in 1987 and guided the club to a Scudetto and a UEFA Cup. With a total of 95 goals from 221 appearances, Careca is Napoli’s seventh top scorer of all time. 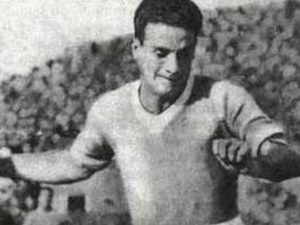 Sallustro joined Napoli when they were first known as Internaples and stayed on with the club for the majority of his career. At Napoli, he was nicknamed “Il Veltro” and “Il Divino”. Due to his rich background, Sallustro chose not to take any financial payments from the club, though he was rewarded with a luxury motor car.

In his career with SSC Napoli and Internaples, Sallustro scored an impressive 108 goals in 268 games, which makes him the third-highest goalscorer in the club’s history.

For almost two decades the Napoli midfield was dominated by Antonio Juliano who by the end of his Napoli career, had notched up 505 games for the club, which at the time was a club record before Giuseppe Bruscolotti would break it in the late 1980s.

He was known for his equal skill at attacking and defending and was wonderful on the ball. He was appointed a few years as captain of this club and also part of the Italian squad that won the Euro 1968 tournament.

The current PSG forward, Edison Cavani is quick, strong, opportunistic, and prolific forward with good technique. Cavani has the ability to score impressive goals, both in the air and with his feet, and for his tireless work-rate.

He is one of the best strikers ever to play for the club after Diego Maradona’s era. The Uruguayan, despite only spending three seasons at the club, scored 104 goals for them, in just 138 matches. He won the Coppa Italia with the club in 2011-12. In 2013 he completed a €70m move to PSG.

One of the greatest Napoli players ever, Ferrara was an elegant yet powerful and tenacious defender. He had composure, technical skills, ball-playing ability, and class, which enabled him to play anywhere along the back-line, both in the center or as a full-back.

The tough Italian center-back was born and bred in Naples and was sensational in a ten-year spell. He even scored in the UEFA Cup Final victory over Stuttgart. He’s still revered by Neapolitans, despite moving to rivals Juventus when he was 27. With Napoli, he won two Serie A titles, one UEFA Cup trophy, and one Coppa Italia trophy. 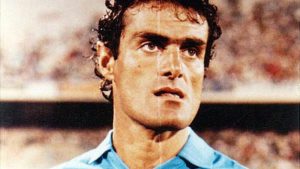 Bruscolotti was a tenacious, imposing, and powerful full-back.  he had great physical strength and balance, as well as his excellent man-marking ability, leadership, and hard-tackling style of play.

He played for Partenopei in the period 1972-1988, winning a Serie A title and two Coppa Italia trophies. Bruscolotti also captained the team for six years, and Neapolitans remember him fondly.

One of the greatest Napoli players ever, Hamsik, is Napoli’s record goalscorer as well as record appearances maker. Since joining from Brescia in 2007, at the age of 19, for a bargain fee of €5.5m, Hamsik has gone on to become a crucial part of the Napoli side.

He scored 121 goals for the club and collected 521 appearances in all competitions during his 12 seasons with the team. Hamsik became the club’s captain in 2014. In February 2019, he joined the Chinese club Dalian Yifang.

He always pledged his loyalty to Napoli even when big European clubs were after him. He has left an everlasting impression on the club.

Widely regarded as one of the greatest of all time, Maradona, was a revolution at the club. He had great vision, passing, ball control, dribbling skills, speed, reflexes and reaction time. His small size gave him a low center of gravity which allowed him to be more maneuverable than most other football players.

During his seven years with the club, Maradona won two Scudetto titles, one UEFA Cup trophy, and one Coppa Italia. He also holds the record as Napoli’s top scorer of all time with 115 goals from 259 appearances. Not only that, when playing for Napoli, he helped Argentine national team win the World Cup 1986.

Checkout : 15 Greatest Serie A Players Of All Time

One thought on “Greatest Napoli Players Ever | Top 10 Legends”