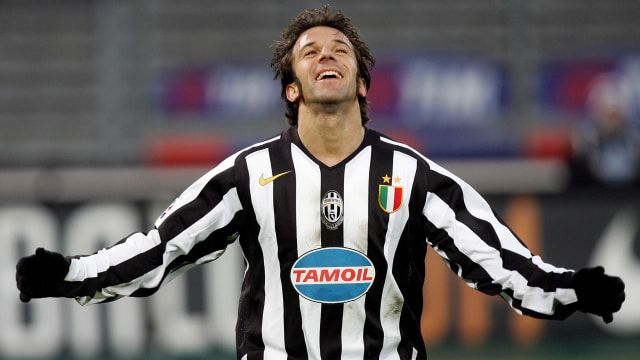 Juventus is the most successful Italian club, winning a record 36 league titles, 13 Coppa Italia titles, 8 Supercoppa Italiana titles among a list of other honors. They have won nine consecutive league titles since the 2011-12 season. Many great players have played for them in their rich history. In this article, let us take a look at some of the greatest Juventus players ever in this ‘Bianconeri legends list’.

Considering factors like loyalty, skills, efficiency, and impact on the club, here are the 10 greatest Juventus players ever –

Trezeguet joined Juventus in 2000 for a transfer fee of £20 million. With 24 goals, he was the joint recipient of the Capocannoniere award for top scorer in his first season, as his team won the 2001–02 Serie A title. Alessandro Del Piero and Filippo Inzaghi were the two regular starters but Trezeguet still bagged 15 goals in all competitions, scoring more with his left foot and head than his favorite right leg.

His instinctive finishing and deft touches in the box from his debut Serie A season provide the perfect antidote do anyone afflicted with the belief that Trezeguet was a wasteful hit-and-hoper. During his 10 year spell, he scored 171 goals in 320 appearances, helping Juve to two Serie A titles and a Champions League runners-up medal. The Frenchman also holds the record for being the best foreign scorer in the history of Juventus.

One of the greatest Juventus players ever, Boniperti, signed for Juventus at age 16. He had already built himself a reputation prior to this at youth level, as he scored 11 goals in one match. Boniperti spent his entire career as a professional footballer with Juventus and won five League titles and two Coppa Italia titles.

He made his senior debut in the year 1947, against AC Milan. Boniperti established himself the following season, scoring 27 times on the way to winning the Serie A golden boot. Three years later, he was lifting the first of five Scudetto titles in 1950, lighting up the Italian game throughout the decade as part of one of the deadliest striking trios the peninsular has ever seen, lining up alongside John Charles and Omar Sivori.

He played 465 games for Juventus scoring 182 times in the process. He was the club’s all-time top goalscorer for over 40 years until Del Piero broke his record in 2006.

The oldest ever winner of the World Cup, Dino Zoff is a legend of Italian football, having made over 110 appearances for the national team and 642 domestic appearances as well for a number of top clubs.

He holds the record for the longest time without conceding a goal in international tournaments and was named Italy’s best player of the last 50 years in 2003. For quality performances and longevity, the goalkeeper is undoubtedly one of the best ever.

He signed for Juventus in 1972 at the age of 30. Dino Zoff played 476 games for Juventus during a spell of 11 years. He had great club success with Juventus, winning 6 Serie A titles, 2 Coppa Italia titles, and a UEFA Cup, also reaching two European Champions’ Cup finals in the 1972–73 and 1982–83 seasons, as well as finishing second in the 1973 Intercontinental Cup final.

One of the greatest Juventus players ever, Nevded, moved to Juventus after five trophy-laden years with Lazio, including two Coppa Italia, one Cup Winners’ Cup, and only the second Scudetto in the club’s history.

In Turin, his legacy transcends trophies and match-winning performances. Though they ensured Nedvěd became European Footballer of the Year in 2003, instead, Nedvěd’s legacy belongs to the man, as well as the player, and the dedication, hunger, and loyalty central to his creed.

Nedvěd’s versatility allowed him to play across the midfield. From the wing, he could fire in crosses or cut inside and unleash violent shots with either foot. Centrally he had the vision, composure, and passing range to conduct play, whilst also possessing the turn of pace required to make darting runs into the penalty box.

After winning four straight Scudetti and reaching a Champions League final in 2003, this loyalty shone through as he remained in Turin despite the club’s relegation to Serie B for their involvement in the 2006 Calciopoli scandal. After helping the Bianconeri return to Serie A, he stayed for three more years, steadying the ship and guiding Juve into a new era of dominance. For that, Nedvěd’s status amongst Juventini is untouchable.

Scirea was a defender of technical skill and tactical ability, gifted with pace, and an innate capacity to read the game. In contrast to the ruthless tactics often employed by other defenders.

In the way he composed himself—always fair, never rash—he defined the kind of player that a Bianconero should be. Scirea was renowned for his class, fair play, and sportsmanship. Scirea never earned a red card in his career.