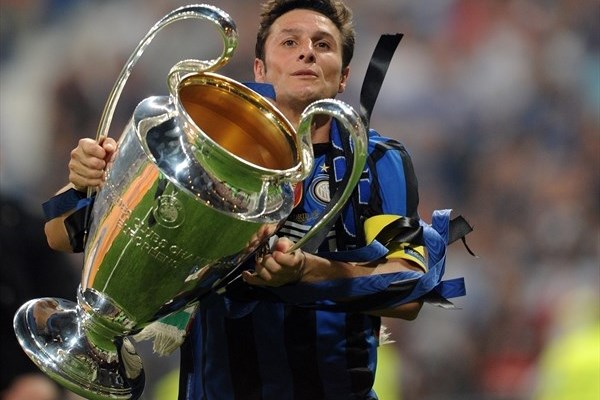 Meazza is considered by many experts to be the greatest Italian player ever. A prolific forward, Meazza won the Serie-A top-scorer award on three occasions in his career; with 216 goals in Serie A, he is the fourth all-time highest goal scorer in Serie A, alongside José Altafini.

The principal stadium in his native city of Milan, which is shared by, Internazionale and crosstown rivals A.C. Milan, is called Stadio Giuseppe Meazza in the player’s honour. In 2011, he was posthumously inducted into the Italian Football Hall of Fame.

With Inter, he won three Serie A titles, as well as the Coppa Italia; he later also played for local rivals Milan, as well as Turin rivals Juventus, in addition to his spells with Varese and Atalanta.

Zanetti is considered a god amongst Inter fans for his 19 years of relentlessly excellent service. He was unknown when he arrived in 1995 but four years later had the captain’s armband and worked his way to a record 858 appearances.

Zanetti won several honours with Inter, including five Serie A and four Coppa Italia titles. The 2010 UEFA Champions League Final on 22 May 2010 was Zanetti’s 700th game with Inter, and the team’s victory on the night made him the only captain to win a treble with an Italian club.

In May 2014, he hanged up his boots and became Inter’s Vice-President.

Checkout: 10 Legendary Players Who Played For Both Milan Clubs