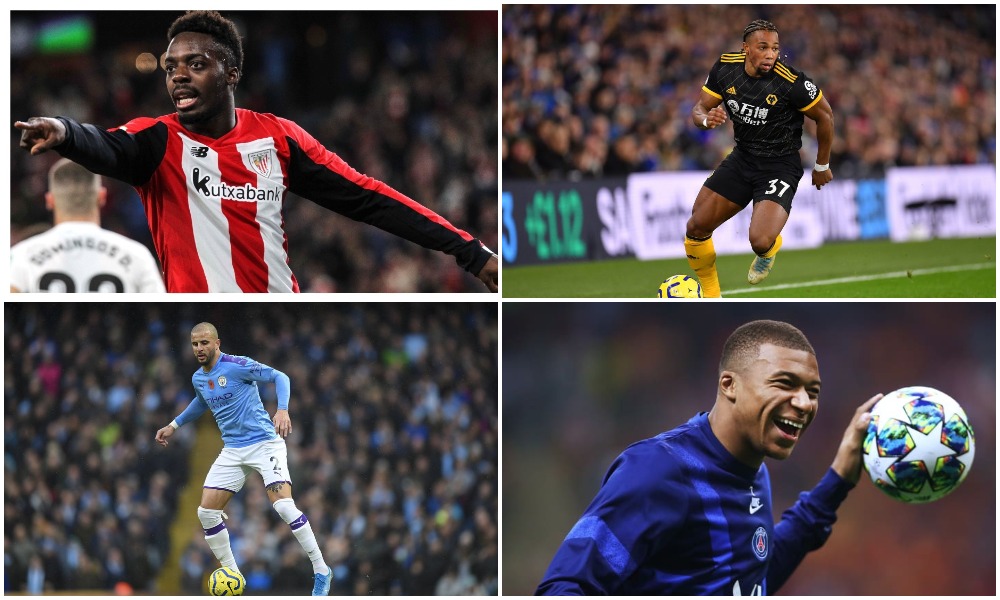 Speed is very important in football as it can hand attackers an advantage over defenders, potentially leading to a match-deciding moment. It can also help set them apart from their peers. Maybe even help propel them to raise their game to a higher level. There’s nothing better than watching a footballer race past opponents on sheer pace. It’s a pulse-raising moment that remains fixed in our minds long afterward.

Here are the 10 fastest football players in the world.

After lighting up the Championship with his consistent performances and not-to-mention vicious pace, Daniel James completed a reportedly £15 mil move to Manchester United last summer. A player known for his raw pace and quick decision-making skills, James made his senior team debut for Swansea City in 2016, having played for Hull City in the youth ranks.

Having clocked a top speed of 35.7 km/h, it comes as no surprise to why Ryan Giggs recently admitted that the 22-year old was the fastest played he had ever seen. James has slowly but steadily cemented his place in the starting lineup in the United team and the fans would be hoping him to achieve great things at the club.

Pierre-Emerick Aubameyang is one of the fastest football players in the world despite the Gabon international turning 31 in the summer. His pace has helped him score 61 goals in 97 appearances for Arsenal as the Gunners desperately try to keep the striker.

Having made his Ligue 1 debut for Saint-Etienne in 2013, the French international was sold to Monaco two seasons later. After spending short loan spells at Hannover 96 and Bastia, he made a permanent move to Nice in 2017 before joining Premier League side Newcastle in the summer of 2019.

Known for his tricks and lightning pace, Maximin became an instant fan favorite helping his side stay afloat in the league. The 23-year old clocked a high speed of 36.7 km/h this season and is one of Steve Bruce’s main men in the squad.

Portuguese international Gelson Martins is a speed merchant. Mainly a winger on both flanks, Martins can also operate as a right-back. The Monaco player is one of the fastest players in the French Ligue 1.

One of the fastest football players in the world, Martins has been used in various positions with good effects because of his speed.

Consistently remaining among the top full-backs in the league over the years, Kyle has developed himself into a beast on the right flank. He may have been criticized for some of his defensive displays lately but his frightening pace gets him up and down the right-wing.

Walker is an ever-present in these kinds of lists. He loves tearing apart opposing defenses with ease when required and banging in crosses to help his team with an extra edge over rivals. Notching up a top speed of 36.85 kmph km/h once, he is one of the fastest football players in the world.

The Athletic Bilbao forward is rapid. Iñaki is fast both on and off the ball, making him indispensable for Athletic Bilbao upfront. He’s also capable of scoring and assisting goals on a regular basis.

He’s proved he’s more than just goals in recent years and has even attracted the attention of Manchester United. The Manchester club was looking to splash £81million on the forward last summer, however, he later signed a new contract with the Spanish club instead.

Despite his lack of playing time in recent seasons, Gareth Bale has always been one of the fastest players in the world. Bale has tremendous upper body strength and he uses it to great effect.

He may not be the first choice for his club right now, but he has still managed to clock a whopping 36.9 kph on the pitch. This puts him clearly ahead of the competition and makes him one of the fastest football players in the world.

The 23-year old German international is enjoying his prime spell at Manchester City this season, displaying brilliant runs and majestic ball-play in the limited chances he has been given. Very few people knew who he was before City broke their banks upon Guardiola’s arrival in a £37 million deal with FC Schalke 04 for the young winger.

Clocking a top speed of 35.48 km/h in a game against Chelsea on 30th Sept 2017, Sane is a real threat to defenders in the League and has been growing into a more lethal product under Guardiola. One of his highlights at City was when he outpaced one of the quickest of the league, Hector Bellerin to score a splendid goal for the Blues. Since then, there is no turning back for Sane as he continues to torment opposition defenses with his sheer pace.

Wolves star Adama Traore is one of the fastest football players in the world. The Molineux ace is certainly the quickest player currently plying his trade in the Premier League. He is one of the superstars of Wolves squad and many big clubs are keeping an eye on him.

Remarkably, the star was once clocked at 37 kilometers per hour. This is the equivalent of 22.99 mph. He was the star of the show when Wolves beat Manchester City at the Molineux, last December.

One of the best players in the world, Mbappe is a lethal finisher and a speedster. He has the ability to burn up the pitch with his speed on the ground.  He has that extra acceleration in him to give the defenders a nightmare defending him.

Mbappe regularly uses his speed to open up opportunities in front of goal. The 20-year-old is aware of his pace and has used it to his advantage very well this season. Mbappe has a top speed of 38kmph, which is frankly terrifying.