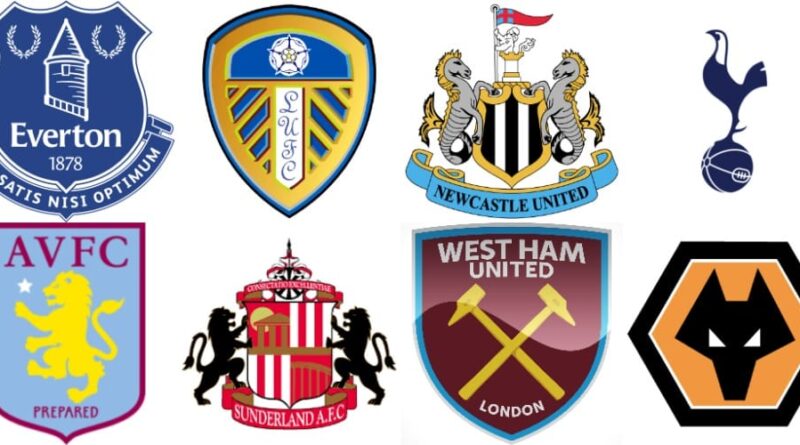 Here are the 25 clubs with most seasons in English top flight football.

Leeds were formed in 1919 following the disbanding of Leeds City by the Football League and took over their Elland Road stadium. Most of their history has been spent competing in the first tier of English football. Their longest continuous spell inside the first tier was a period of 18 years between 1964 and 1982, while their longest period outside of it spanned 16 years between 2004 and 2020.

They have won three English league titles, one FA Cup, one League Cup, two Charity/Community Shields and two Inter-Cities Fairs Cups. The club reached the 1975 European Cup Final, losing to Bayern Munich. Leeds reached the semi-finals of the tournament’s successor, the Champions League in 2001. The majority of the honours were won under the management of Don Revie in the 1960s and 1970s.

Leicester shocked the whole world by winning the 2015–16 Premier League, their first top tier title, becoming one of seven clubs to have won the Premier League since its inception in 1992. They have also won the League cup three times.

Nottingham Forest are the oldest professional football club in the world. The club was founded in 1865 and have played home matches at the City Ground since 1898. The club has competed in the top two tiers of English football since their admission to the Football League, with the exception of five seasons in the third tier.

Their most successful period was under the management of Brian Clough and Peter Taylor in the late 1970s and early 1980s, which included back-to-back wins in the European Cup in 1979 and 1980. Overall, they have won one League title, two FA Cups, four League Cups, one FA Charity Shield, two European Cups, and one UEFA Super Cup.

They won the League Cup in 1963 and again in 2011. St Andrew’s has been their home ground since 1906. They have a long-standing and fierce rivalry with Aston Villa, their nearest neighbours, with whom they play the Second City derby. The club’s nickname is Blues, after the colour of their kit, and the fans are known as Bluenoses.

The team have a long-standing rivalry with nearby club Blackburn Rovers, with whom they contest the East Lancashire Derby. Burnley turned professional in 1883, becoming one of the first professional clubs and subsequently, put pressure on the Football Association to permit payments to players.

Middlesbrough were formed in 1876, turning professional in 1889. The club plays at the Riverside Stadium since 1995, having earlier played at the Linthorpe Road ground from 1882 to 1903 and at Ayresome Park for 92 years, from 1903 to 1995. Middlesbrough were one of the founding members of the Premier League in 1992 and became one of the first clubs to be relegated from it following the 1992–93 season.

The club’s achievements include winning the League Cup in 2004, their first and to date only major trophy, and they also reached the 2006 UEFA Cup Final, losing to Spanish club Sevilla.

Stoke City were founded as Stoke Ramblers in 1863. The club changed its name to Stoke Football Club in 1878 and then to Stoke City in 1925 after Stoke-on-Trent was granted city status. Stoke’s home ground is the 30,089 all-seater, Bet365 Stadium. Before the stadium was opened in 1997, the club was based at the Victoria Ground, which had been their home ground since 1878.

Stoke were one of the twelve founding members of the Football League in 1888. Their first, and only major trophy to date, the League Cup was won in 1972, when the team beat Chelsea 2–1. The club’s highest league finish in the top division is fourth, which was achieved in the 1935–36 and 1946–47 seasons.

Sheffield United were formed in 1889, as an offshoot of Sheffield United Cricket Club. They are nicknamed The Blades due to Sheffield’s history of steel production. They have played home games at Bramall Lane since their formation. Sheffield United won the original Football League in 1898 and the FA Cup in 1899, 1902, 1915 and 1925.