We’ve all seen celebrities donning their footy gear, supporting their sides with pride.  And in a way, when they support our team we too feel a sense of pride. We now present you with our list of Celebrity Fans And Their Favourite Football Clubs ! 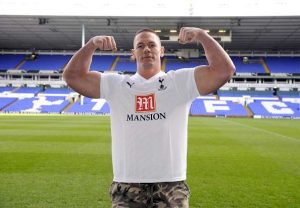 Probably the most famous WWE wrestler of this generation, John Cena is reportedly a huge fan of Premier League side Tottenham Hotspur. The American wrestler visited White Hart Lane in 2008 and even received a jersey from former Tottenham manager Gerry Francis.

English cricketer James Anderson follows football passionately despite having commitments to cricket and his team. Though he claims that he follows Burnley’s development since it being his hometown, he is also an avid Arsenal fan and has been seen many a time during Barclays Premier League matches.

Born in Chester but raised on Merseyside, the James Bond actor is a big Liverpool fan. He idolises ex-captain Steven Gerrard and before one game, the skipper waited for Craig in the Liverpool foyer wanting his photograph taken with “Agent 007”. 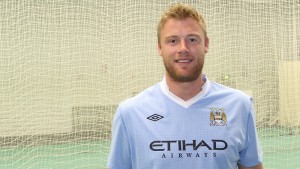 United States’ ex-President’s sister lives in East London and her family are all Upton Park regulars. The story goes that Obama himself said he is “hooked” after watching a game on television during one of his trip to England over from the States.

The Jamaican sprinting legend is one of United’s biggest fans ,he even once said that he could play for Man United! Sir Alex Ferguson once said ‘He’s a bit of a character and a big United fan. But it’s interesting he says he’d like to play in a charity game. It could be brilliant and next year, when we play Real Madrid’s Legends again, there could be opportunities to bring him up and see how he does.’

Unfortunately for him that time didn’t come, but he still loves the club with full passion.

The Australian, star of films such as X-Men and Australia, has said his mother lives in Norfolk and is a self-proclaimed Canaries supporter. He once turned down a chance to invest in his beloved Canaries.

“I got a letter asking that, as a huge Norwich fan, would I like to be a celebrity investor,” said Jackman. “That was a little bit stretched – I’ve been to Carrow Road once when my mum took me”, so I decided not to invest.

Norwich then recorded back-to-back promotions, securing a return to the Premier League within few years. ” Sometimes I make mistakes,” he added. 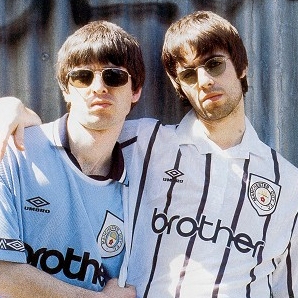 Liam and Noel Gallagher are big Man City fans. On 30 April 2012, Liam Gallagher attended Manchester City’s vital derby match with rivals Manchester United. City won the match through a Vincent Kompany goal, to go above United at the top of the Premier League. Gallagher was seen celebrating the victory, and interrupted a post-match press conference, telling reporters “What do you want to know lads? … top of the league”.

Rafa has been a Real Madrid fan since many years. In fact he even recommended Florentino Perez to sign the Mallorca wonderkid Marco Asensio. His uncle Tony Nadal once said ‘”Rafa would have rather played for Real Madrid than be a tennis player”.

The Queen has been a fan of Arsenal for more than 50 years, royal sources have revealed. Support for the Gunners runs in the family, with her mother, the late Queen Mother, and grandson Harry also showing support for the North London team.

The revelation came after the Queen, 81, met the Arsenal team and manager Arsene Wenger at a reception in Buckingham Palace in February,2007. She is one of the most famous ‘Celebrity Football Fans’. 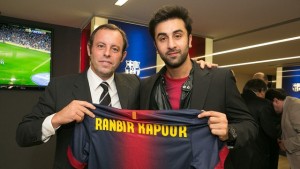 Ranbir Kapoor is a famous actor of the Bollywood movies and a fan of FC Barcelona. Kapoor is also the FC Barcelona Ambassador to India. Kapoor (in an interview with Barca TV) considered it an honor to be associated with FC Barcelona. He is promoting the club and its values at schools in India.

Kapoor talked about his support for the club since the early 1990s and how they play great world football. He was seen in a video with Gerard Pique during a visit to FC Barcelona.

Tennis Legend Roger Federer is a keen fan of his local team FC Basel.”I love to watch soccer, FC Basel is my favourite team” he said in an interview.