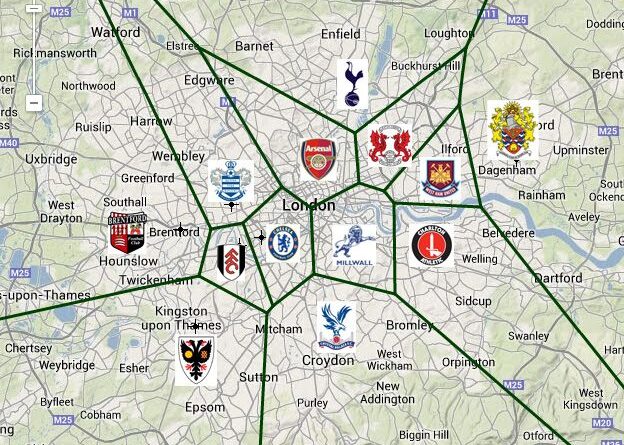 London, being the capital of England, has some of the biggest football clubs. The city stuffed full with rivals vying for local dominance and the recognition that the city should be painted red, blue, white or whatever other colours their players walk out wearing on a match day. It’s no surprise that London has no less than 12 professional clubs scattered throughout the city and many more clubs playing in the lower divisions. Arsenal, Chelsea and Tottenham Hotspur are the most successful London teams.

In this article, let us have a look at some of the biggest football clubs in London.

Charlton Athletic are the South East London side who play in England’s third-tier competition EFL League One. They have the most rivalries against Crystal Palace and Millwall. Charlton’s most notable trophy is the FA Cup in 1947 after losing in the final in 1946.

The club’s fans are really attached to their club as till 2008 any season ticket holder could apply to be the elected supporters’ director. Now, this process has been abolished but a Fan’s forum has been formed that takes the important decisions for the club. The Club supporters are commonly known as ‘The Addicks’ and the club is also associated with popular culture.

‘The Bees’ currently compete in the EFL Championship, which is the second tier in English football. The club saw most of its success in the early decades of the 1900s when they saw two top-five finishes in the League Championship.

Brentford Community Stadium is the new home of the club replacing Griffin Park in 2020. Brentford has made successful runs in the FA Cup, making it to the quarter-finals on four separate occasions.

Millwall are nicknamed ‘The Lions’ and are currently in the second tier of English football. The Lions home ground is called, ‘The Den.’ In 2004, they reached the FA Cup semifinal and qualified for the UEFA Europa Cup.

In the media, Millwall’s supporters have often been associated with hooliganism, with numerous films having been made fictionalising their notoriety. The fans are renowned for their terrace chant “No one likes us, we don’t care”. Millwall have a long-standing rivalry with West Ham United.

Based in White City, QPR have regularly jumped between the top two tiers of English football. They enjoy one of the stronger reputations for teams based on the south bank of the Thames. With their most successful spells coming in the 1970s and mid 1990s, QPR has finished second in the top flight once during the 1975/76 season whilst also having won the League Cup back in 1967.

They have the main rivalries against the West London clubs like Chelsea, Fulham and Brentford. The West London Derbies are renowned for the cheering of fans throughout the whole match.