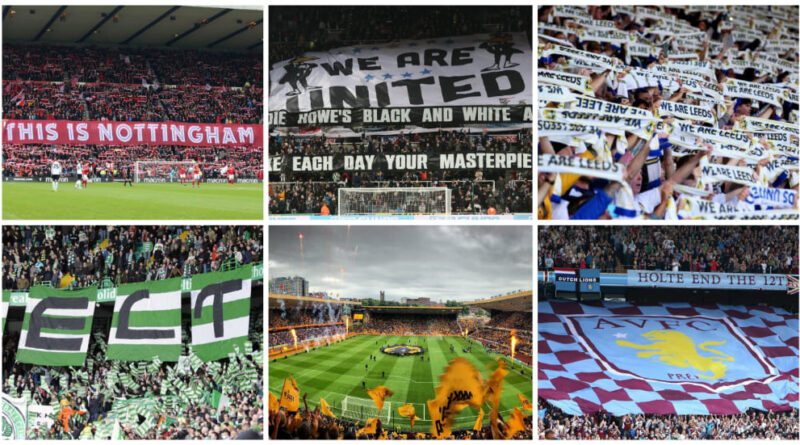 In this article, we have ranked the best stadiums in the UK according to the atmosphere, including stadiums from the Premier League, Championship, League One, and the Scottish Premiership. The ranking is done by considering the user ratings from websites like footballgroundmap, the92, Tripadvisor, and many more.

Villa Park has been the home of Aston Villa Football Club since 1897. They say once you visit Villa Park, you want to go there again and again. This majorly happens because of the splendid atmosphere that is there for the matches. It has a good capacity of 42 thousand. The stadium has been renovated many a time by the management to bring create an emphatic atmosphere and surround.

It has been home to Nottingham Forest Football Club since 1898 and has 30,445 seats. Nottingham Forest moved to the City Ground in 1898 after unsuccessfully trying to find a permanent home in previous decades.

It’s an old football ground with lots of character that you don’t get to see in lots of other places in the UK. The atmosphere is very good in the City Ground. There is always great banter between the home and the away fans and the stadium is well stewarded. It is a great place with a wonderful experience for both home and away fans as well as all the usual facilities.

Valley Parade, also known as the Northern Commercials Stadium through sponsorship rights, has been the home ground of Bradford City since 1903. The stadium underwent few changes until 1985, when it was the scene of a fatal fire on 11 May 1985, when 56 supporters were killed and at least 265 were injured. It underwent a £2.6 million redevelopment and was re-opened in December 1986. The ground underwent significant changes in the 1990s, and early 2000s, and now has a capacity of 25,000.

The ground is fantastic and towers over many grounds in this league. The supporters are great and the stadium echoes with glorious years gone by. It is one of the best stadiums in the UK according to the atmosphere.

Bramall Lane has been the home of Sheffield United since the club’s establishment in 1889. It is the oldest major stadium in the world still to be hosting professional association football matches. The current capacity of the stadium is around 32k. It is one of the best stadiums in the UK according to the atmosphere.

Being the oldest major football ground in the World, Bramall Lane is an attraction well worth visiting in Sheffield. It is full of atmosphere, whether you visit on a match day or just go for a tour around the stadium. When Sheffield United play a home game, the crowd is fantastic and you can’t help but join in with the excitement and cheers that fill the stadium. It doesn’t matter if you sit with the home fans or the away fans, you are guaranteed to leave the Lane with a smile on your face.

Fratton Park has been the original home of Portsmouth F.C. ever since the football club was first founded in 1898. Fratton Park is built in a traditional English style of four separate stands arranged closely around the four sides of the football pitch. The stadium has a current capacity for 19,669 supporters, although the stadium has had a much larger capacity in its history, with a record attendance of 51,385 supporters.

The atmosphere on match days is electric. There are local pubs within walking distance and car parking available nearby. The football pitch, measuring 115 x 73 yards, is aligned from east to west, which is considered unusual in English football, as most other pitches are orientated north to south. Overall, visiting Fratton Park will give you a nice matchday experience.

The home of Rangers, Ibrox is the third-largest football stadium in Scotland, with an all-seated capacity of 50,817. The atmosphere in this stadium at bigger games is absolutely electrifying.

Ibrox Stadium was mostly re-developed in the late 1970s and early 1980s with three new stands being constructed. Only the Main Stand at one side of the pitch remains of the old Ibrox. This stand has also been refurbished and in 1994 a third tier was added to it.

Anfield has been the home of Liverpool F.C. since its formation in 1892. It was originally the home of Everton F.C. from 1884 to 1891, before they moved to Goodison Park after a dispute over rent. It has a seating capacity of 54,074 making it the sixth-largest football stadium in England. The stadium has four stands: the Spion Kop, the Main Stand, the Kenny Dalglish Stand and Anfield Road.

The atmosphere generated inside the stadium is electric and very few clubs can rival this. You’ll Never Walk Alone sang by 50,000+ supporters is an experience you will never forget. The Kops are considered to be one among the loudest of all fans around the world. There are so many occasions where the Anfield crowd has won games for Liverpool being the 12th man. The stadium tours also give a great look back at the history of LFC.

12 thoughts on “10 Best Stadiums In UK According To Atmosphere”