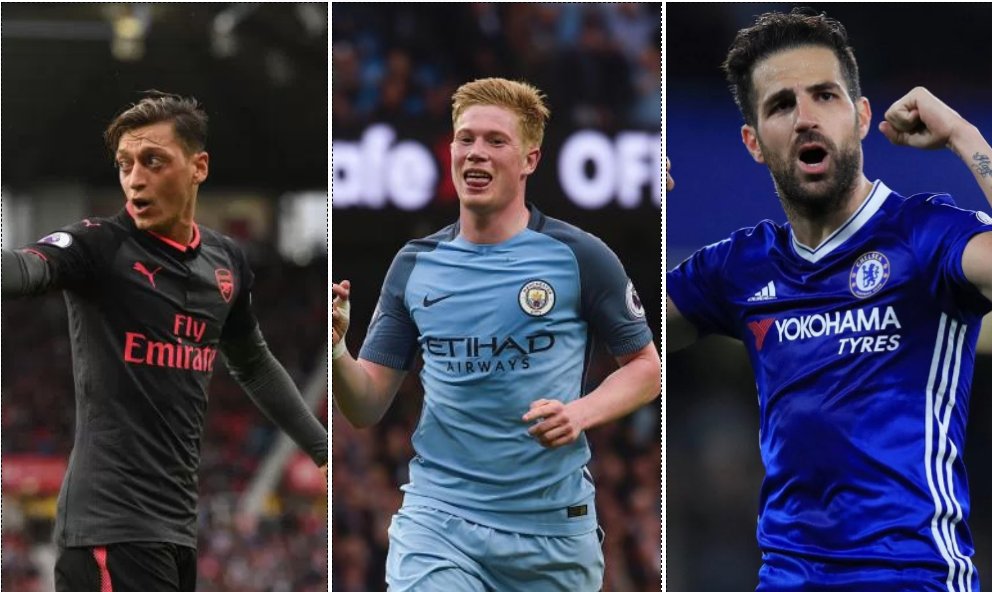 Scoring goals becomes all the easier when you have a skilled playmaker who provides you with the chance to score goals. The No. 10 role is arguably the most important role in any team.

The primary string-puller of the team, he helps keep things moving forward for the team and is usually the one to provide that all-important assist for the striker to score.

Premier League is one of the toughest league in the world, its not very easy to perform consistently in this league. However, over the years there have been some great players, who with their consistency and control over the ball has made life easier for the goalscorers.

Let us have a look at some of the players with best minutes per assist ratio in the Premier League history.

We have only included players with a minimum of 20 assists. Here are the top 10 players with best minutes per assist ratio in the Premier League history

Since joining Arsenal from Real Madrid in 2013, Mesut Ozil has been one of the star performers for the Arsene Wenger’s side. Ozil has proved himself to be a classic example of how a single player can uplift an entire team and give confidence to the fans.

Smicer was attacking midfielder who played for Liverpool in the Premier League. He was signed by Gerard Houllier in 1999 to replace Steve McManaman and was instantly handed the winger’s number seven shirt. He spent six seasons with Liverpool and is perhaps best remembered for his long-range goal in the 2005 Champions League Final.

His 24 assists came in just quick enough time to earn him a place in the list of players with best minutes per assist ratio in the Premier League history.

Eyal Berkovic was one of Israel’s greatest players. In the Premier League, he played for West Ham United, Manchester City and Portsmouth. His time in the Premier League started with West Ham when he was signed by manager Harry Redknapp for £1.75 million in 1997.

He later joined Manchester City in 2001 and spent three seasons before leaving for Portsmouth in 2004. However, he failed to hold down a regular starting place in the Portsmouth’s team for the 2004–05 season and left the club in 2005.

When David Silva first arrived in Manchester to begin his City career, very few would have expected him to make such an impact on the club.

The Spanish technician now looks a bargain at £24m – the fee City paid Valencia for his services way back in 2010. He’s possibly the most consistently eye-catching player the Premier League has witnessed and, there’s an argument to claim he’s City’s best ‘ever’ player.

Eric Cantona is one of Manchester United’s greatest players and arguably the most influential of the Premier League era. He was a ferocious player and he always brought the energy on field.

Signing the Frenchman from Leeds United was the single most significant move Sir Alex Ferguson made in creating the team that dominated the early years of the Premier League. At United, Cantona won four Premier League titles in five years and two League and FA Cup Doubles.

Fabregas came through La Masia, Barcelona’s youth academy, leaving at 16 when he was signed by Arsenal in September 2003.

The Spaniard was pivotal in the Gunners’ run to the Champions League final in 2005/06 and soon emerged as arguably the biggest young talent in European football. He soon added goals to his game and ran games week in week out. He also won the FA cup in 2005.

His bond with Arsenal was so strong that in 2011 he even told Spanish magazine Don Balon: “If some day I leave Arsenal it will never be to sign for another English team. I’m very sure.” However, he left Arsenal the same year to join Barcelona before returning in the Premier League with Chelsea in 2014.

There are some footballers for whom statistics and even words simply can’t do justice. Dennis Bergkamp is one of those players. As a No.10 for most of his career, his statistics are mightily impressive, but they still don’t do him justice. They can’t describe his brilliance. He set the bar for what it means to be a footballing artist.

In 2007, he was inducted into the English Football Hall of Fame, the first and so far only Dutch player ever to receive such honour. In 2017, Bergkamp’s famous goal against Newcastle United was voted as the best Premier League goal of all-time in the league’s 25-year history. He also has one of the best minutes per assist ratio in the Premier League history.

Nani joined Manchester United in July 2007 for a fee of €25 million. Nani has always had the ability to pull off moments of magic. Never content with a tap-in, the majority of his goals include the winger tearing past a defender or two, looking up then thundering a shot into the top corner.

Nani won the Community Shield on his competitive debut at Manchester United and added a number of trophies, including the Premier League and Champions League during his debut season at the club.

He established himself as the first-choice winger at United and won a further three Premier League titles, the Football League Cup, one FIFA Club World Cup, and three Community Shield titles.

Spaniard Jose Antonio Reyes arrived at Highbury in a big-money deal on 30th January 2004. The Sevilla forward was a relative unknown outside of his own country, but Arsene Wenger had seen enough to splash the cash on the 20-year-old and bring him over to England to add further power to his strikeforce.

With Arsenal, he won the Premier League and FA Cup as well as finished runners-up in the Champions League final in 2006. Reyes returned to Spain in a swap loan deal with Real Madrid’s Julio Baptista in August 2006.

De Bruyne has highly impressed since he returned to England with Manchester City in 2015. He has been Manchester City best player since his arrival from Bundesliga. He could play in many roles according to the demand of the manager.

De Bruyne could play in the middle, off either flank or behind the striker but now, having been dropped back to a regular, deeper role in the centre of the midfield. This is where he belongs, pulling the strings and spearing defences with perfect through balls.

Checkout: Top 10 Players With Best Minutes Per Goal Ratio In The Premier History