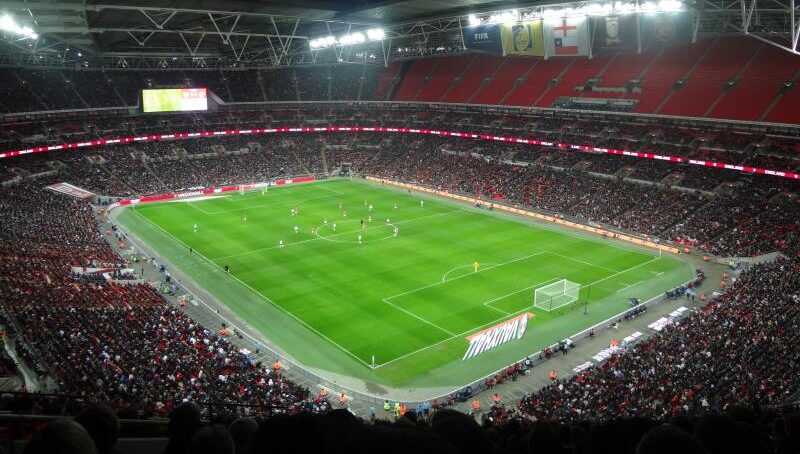 These stadiums are ranked on the combined basis of Location, View, Facilities, Food, Security and Atmosphere. Combining the votes of millions of football fans, here are the 20 best football stadiums in England.

Molineux has been the home of Wolves since 1889. The first stadium built for use by a Football League club, it was one of the first British grounds to have floodlights installed and hosted some of the earliest European club games in the 1950s.

Molineux was the site of the first ever league game played in English history. On 7 September 1889 Wolves beat Notts County 2-0.

Molineux is a 32,050 all-seater stadium, but it consistently attracted much greater attendances when it was mostly terracing. In 1939, Molineux recorded its highest attendance when 61,315 fans saw Wolves play Liverpool in an FA Cup match.

In May 2010, Wolves announced a £40 million redevelopment programme of Molineux. Under the plans, three stands would gradually get rebuilt and linked up, which would lead to a capacity of 38,000 seats.

Works started in 2011 on the Stan Cullis Stand, which was completed in 2012. The next two stages, however, were postponed as the club stated to want to use the limited funds available for the development of the Wolves youth academy. There are provisional plans for a longer term redevelopment of every stand that could create a 50,000 capacity.

Hillsborough Stadium has been the home of Sheffield Wednesday since its opening in 1899. They played their first match at their new ground on 2 September 1899 against Chesterfield (5-1). At that time, the stadium was still called Owlerton Stadium.

Hillsborough set its record attendance in 1934 when 72,841 people attended an FA Cup match between Wednesday and Manchester City.

It has two large two-tiered stands and two large single-tiered stands, all of them covered. All four stands are of a similar capacity with the South Stand being the largest and the West Stand, usually housing the away supporters, the smallest.

Supporters have ranked this stadium among the best football stadiums in England.

Craven Cottage has been the home of Fulham Football Club since 1896. The Club played at various grounds in west London before finally settling on Craven Cottage.

The stadium is located in the London Borough of Hammersmith and Fulham, bounded by the River Thames to the west and Stevenage and Bishops Parks to the north and south respectively.

Craven Cottage reached its record attendance in 1938 when a total of 49,335 spectators attended a game against Millwall. One decade later, Craven Cottage hosted a few games during the 1948 Olympic Games.

The Club now regularly sells out its matches and has gained approval to redevelop the Riverside Stand. The new design will bring the capacity of Craven Cottage up to 30,000 and bring landmark improvements for both the Club and the local community.

Elland Road has been the home of Leeds United since the club’s formation in 1919. The stadium is the 14th largest football stadium in England, and the fourth largest outside the Premier League, with an an all-seated capacity of 37,890.

Elland Road has four stands – the Don Revie (North) Stand, the East Stand, the South Stand and the John Charles (West) Stand. The record attendance of the stadium is 57,892, which was set on 15 March 1967 in an FA Cup 5th round replay against Sunderland.

Elland Road was one of the playing venues of the Euro 1996 Championships, during which it hosted three group matches.

In the early 2000s, Leeds investigated a move to a brand new 55,000-stadium, however these plans were shelved after the club’s finances severely deteriorated. Only smaller renovations have been made to the stadium since. It is definitely, one of the best football stadiums in England.

New York Stadium was built to provide Rotherham United with a new permanent home after they were forced to leave their traditional home Millmoor and temporarily move into Don Valley Stadium in Sheffield.

Rotherham obtained planning permission in 2010, and started construction in the summer of 2011. The stadium came at a cost of £20 million.

One of the best football stadiums in England, New York Stadium has a current capacity of the stadium is 12,021, which can be easily expanded with another 4,000 seats.

King Power Stadium has been the home of Leicester City since its opening in 2002. The all-seater stadium has a capacity of 32,313, the 20th largest football ground in England.

The King Power Stadium, then still called Walkers Stadium, officially opened on 23 July 2002. The first match at the stadium, a friendly between Leicester and Athletic Club de Bilbao (1-1), was played twelve days later.

In 2011, the stadium got renamed King Power Stadium after the company of the club’s new Thai owners.

The King Power Stadium has four stands (i.e. The North, East, South and West stands respectively) that each join in an enclosed design. The away supporters are situated in the corner between the North and East Stand.

The North and South stands have original names dating back to when the stadium was built. The North Stand called the Lineker Stand, after club legend Gary Lineker, and the South Stand named as the Fosse Stand, after Leicester’s original club name Leicester Fosse.

Pride Park Stadium has been Derby County’s home ground since 1997 when the club relocated from its former home, The Baseball Ground.

With a capacity of 33,597, it is the 16th-largest football ground in England and the 20th-largest stadium in the United Kingdom. As well as Rams’ home games, the stadium is used for a range of non-matchday activities including conferences, weddings and other sporting events.

In recent years, the stadium has hosted concerts by major international music artists, monster trucks and international friendly football matches. This can easily be regarded as one of the best football stadiums in England.

City Ground has been home to Nottingham Forest since 1898. It was initially a rather small ground consisting of mainly wooden stands. The East Stand was opened in 1957. The opening match of the new East Stand also meant a new record attendance for the City Ground. A total of 49,946 people saw Forest play Manchester United that day.

In 1962, a fire heavily damaged the wooden main stand, but it was successfully restored. Six years later, another fire completely destroyed the same stand, which was subsequently rebuilt. The stadium could at that time hold about 43,000 people, of which 17,500 seated.

The City Ground was one of the playing venues of the 1996 European Championships, during which it hosted three first-round group matches.

In recent years, the club has investigated the possibilities of building a new stadium. These at one time became rather concrete as part of the England 2018 World Cup bid, but the failed bid and recurring resident opposition at proposed sites have thus far halted any progress.