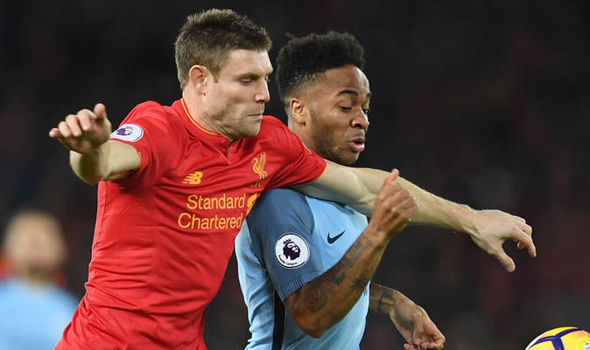 With both Liverpool and Manchester City going head to head for the Premier League title, it will be an interesting match when both these teams clash for a 6 pointer game at the top of the table. Liverpool have ex Citizens in their team in the form of Milner and Sturridge, while City also have an ex-Red as Sterling. They will provide the extra spice for this special affair. However, they are not the only players who played for both Liverpool and Manchester City in their career. In fact, there are more than 20 players who played for both these clubs. In this article ,we will have a look at some of those players.

Hamann was instrumental during his time at Liverpool, arriving at the club in 1999. He enjoyed a successful spell at the club, winning every trophy possible besides the league title. The German was a key figure in the miraculous comeback win over AC Milan in the 2005 Champions League final. He left Liverpool in 2006 to join Manchester City. The German spent three years in Manchester, playing 71 times and scoring one goal.

Following seven successful years at Arsenal, Toure joined Manchester City in 2009 and was made club captain by Mark Hughes. City finished fifth in his first season, but Hughes was replaced by Roberto Mancini and the Italian handed the armband to Carlos Tevez. Toure became a squad player in 2011/12, making only 14 league appearances as City won the title.

After another season as a bit-part player, Toure joined Liverpool on a free transfer in 2013, narrowly missing out on another league winner’s medal in his debut campaign. The centre-back moved to Celtic in 2016.

Milner joined City in summer 2010 after an impressive spell at Aston Villa, making his debut in a comfortable 3-0 win over Liverpool. The versatile midfielder provided two assists in the famous 6-1 triumph at Old Trafford the following year, which was one of his 26 league appearances in City’s title-winning campaign under Roberto Mancini.

Milner also won the league at the Etihad in 2014, before joining Liverpool a year later. He was deployed at left-back by Jurgen Klopp for much of 2016/17, but is now one of many midfield options available to the Merseyside club.

A Champions League winner at the age of 19 with Inter, Balotelli moved to the Etihad in 2010. He quickly became a cult hero with City fans, and increased his status even more following his two goals and the infamous “Why Always Me?” celebration in the team’s 6-1 win at Old Trafford. He provided the assist for Sergio Agüero to score the goal that won the Premier League title in 2012. Balotelli was sold to AC Milan, fulfilling his boyhood ambition.

18 months later the Italian was back, moving to Liverpool in a £16m deal. However, things didn’t go according to plan on Merseyside. He only scored one PL goal for Liverpool before leaving for Milan in 2015.

The fiery Welshman played for a whole host of Premier League clubs, joining Liverpool in 2006. He scored some big goals for the Reds, his biggest coming at the Nou Camp as Liverpool beat Barcelona 2-1. He had his share of controversies as well before moving on at the end of the season.

Bellamy joined Manchester City in January 2009 and was a serviceable figure in their team. He eventually returned to Liverpool in 2011, under Kenny Dalglish. Bellamy would help the Reds win the League Cup, with his winning goal against City in the semi-final. While not overly consistent, the Welshman was a good hand for Liverpool during two separate spells.

Cruelly nicknamed “Calamity James” during his spell at Liverpool between 1992 and 1999 after a number of high-profile mistakes, this didn’t stop him from eventually becoming England’s undisputed first-choice goalkeeper, and one of the highest appearance makers in Premier League history. Following spells at Aston Villa and West Ham, James had a two-year stint at City, leaving in 2006 to join Portsmouth. He retired in 2014.

Anelka joined Liverpool on loan from PSG for the second half of the 2001/02 season and scored some crucial goals as the Reds finish second. Gerard Houllier opted to sign El Hadji Diouf at the end of the season, though, turning down the chance to make Anelka’s deal permanent.

Instead, the French forward signed for Kevin Keegan’s City side for a club-record fee of £13m. He finished his first season at Maine Road as the club’s top scorer on 14, before bagging 25 the following campaign.

It may come as a surprise to some that the man responsible for so much success at Old Trafford actually played out his entire league career at their two biggest rivals. An inside forward who joined Manchester City in 1928, he played at Maine Road for eight years before moving to Liverpool in an £8000 deal towards the end of the 1935 – 36 season. He played out the rest of his playing career at Anfield, before the Second World War interrupted the league programme. In 1945, after rejecting a coaching role at Liverpool, he went on to become a Manchester United legend, managing them for almost 25 years.

Fowler burst onto the scene in the early ’90s, becoming the latest Anfield striking sensation, and was PFA Young Player of the Year in consecutive seasons during the middle of the decade. The Toxteth-born striker, known affectionately as ‘God’ by those of a Reds persuasion, scored 171 goals in 330 appearances in the first of two spells at Liverpool and won two League Cups, one FA Cup and the Uefa Cup before moving to City in 2003, via 18 months at Leeds.

Just over two years after his Anfield departure, Fowler scored a last-minute equaliser against his former employers at the then-named City of Manchester Stadium, a game in which ex-Red Nicolas Anelka and future Citizen Dietmar Hamann also found the net. One of Fowler’s final acts as a City player was to score in a 3-1 win against Manchester United in January 2006, the month of his return to Liverpool.

Liverpool signed Sterling as a 15-year-old in 2010, with the winger going on to make his senior debut at the age of 17 two years later. The former QPR youngster excelled alongside Luis Suarez and Daniel Sturridge in 2013/14, earning a nomination for the PFA Player of the Year award as the Reds finished second under Brendan Rodgers.

Sterling signed for City in summer 2014, with Liverpool pocketing £49m from his sale. The England international initially struggled for form and consistency, but he’s made great strides under Pep Guardiola and has been one of the Premier League’s best players since last season.