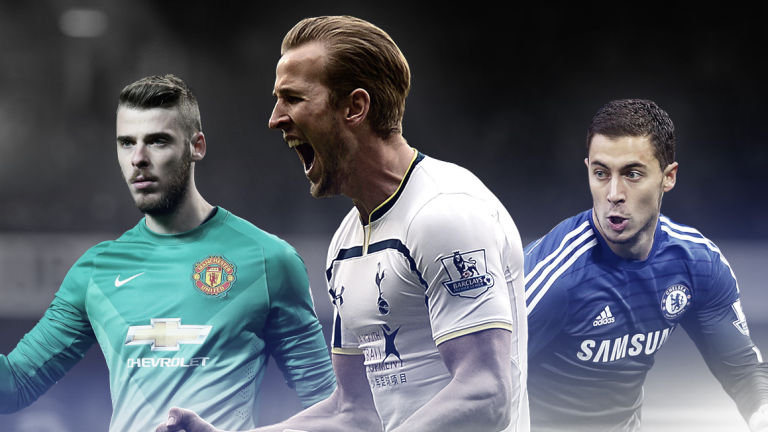 Premier League is one of the most competitive football leagues in the world. The players play with all their heart for their teams . The league is quite physical but still we see some real good football here, which is really soothing for the eyes.

Here are the list of top 10 best players in the Premier League. There is congestion of good footballers in this league but still these footballers excelled themselves somewhere in a higher standard than the others.

The Spanish right back is currently used as one of the men in the three-man defense of Chelsea. Azpilicueta has been accustomed with the new role in the field and is proving to be a ‘Wall’ in the defense of Chelsea. His presence at the back gives freedom to the other players to go ahead. The workload he takes in every match is unbelievable and he is surely considered to be one of top defenders in the world.

The Egyptian star player is the highest goal scorer for Liverpool this season and the player is keeping scoring tally well above than the others. Liverpool are looking dangerous in the attacks because of the presence of this man upfront in the opponent’s penalty box. His quick feet and blistering pace are a matter of concern for the opposition defenders.

David de Gea has been the wall of Manchester United for last few seasons. He is the lone man who has performed consistently for his team. Whenever called upon, David invariably demonstrated that his goalkeeping prowess remained as sharp as ever. His crucial saves at various occasions have kept Manchester United in a respectable position in the Premier League.

After joining Arsenal in 2014, Sánchez quickly established himself as the figurehead of the team, completing every season in England with double figures in both goals and assists. He always delivers for the Gunners when the team needs him the most. His dribbling ability and scoring range from wide angles made a valuable asset in the league. He won the FA Community Shield, as well as the FA Cup on two occasions, scoring in both finals.

The Liverpool star midfielder is one of the best players in the Premier League right now. He is the prime transfer target for the Catalonian Giants Barcelona in this winter transfer window. The player have a potential of taking shots from distance and is also a very good set-piece taker. Alongside Roberto Firmino, Mo Salah and Sadio Mane, Philippe Coutinho plays a key role in Liverpool’s fluid attack. The Reds boast one of the most entertaining frontline in English football.

This Manchester City midfielder is one of the unsung heroes in the Premier League. David Silva has been one of the most consistent performers of Manchester City in the recent past and it has earned him a place among the greats. Currently the central pillar to Manchester City’s midfield, it’s no surprise that they are breaking records for fun at the moment; having recently set up a record of 18 straight Premier League wins in just the second season after Guardiola’s arrival at the Etihad. Silva’s distribution of ball and passing ability made him a real threat for the defenders.

Hazard’s return to full fitness has coincided with his return to form for the Blues, 2015 PFA Player of the Year – is outshining the rest of the players who play in a similar role to him in the Premier League this season. The Belgian Wizard is the best dribbler in this League. He is the X factor behind Chelsea’s 2 Premier League titles in the last 3 seasons.

The Tottenham Hotspur star striker scored 56 Goals in 2017, which is highest among the top 5 European Leagues. He is surely one of the best centre forwards of world football right now, if not the best. His instincts in front of the Goal and the ability to take a shot from anywhere in the Penalty Box made him superior than the other strikers of the League. He won the last two Premier League golden boot and is in contention to win his 3rd consecutive golden boot this season.

Pep Guardiola’s side are currently on a unbeaten-streak and one of the major reasons for their superb form has been attacking midfielder Kevin De Bruyne. He is undoubtedly one of the best playmaker in world football, if not the best. De Bruyne averages more than three key passes per game and has a passing accuracy of over 80%, figures that are world-class for an attacking player. Along with David Silva, De Bruyne dictates the play for Manchester City and is their most important player in their squad.